2019 in review: Franklin and Southampton County

[Editor’s note: This is the first of two parts]

Virginia’s criminal justice system dominated headlines in Franklin and Southampton County in more ways than one during 2019. 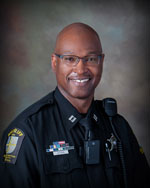 Capt. Josh A. Wyche will be sworn in this month as the new Sheriff of Southampton County. — File Photo

In February, four law enforcement officers — two from within the Southampton County Sheriff’s Office and two from other agencies — declared their candidacy for the office of sheriff following Sheriff Jack Stutts’ announcement that he would retire at the end of the calendar year. Capt. Josh A. Wyche Sr. of the SCSO ultimately won the election in November, defeating challengers Mark B. Turner, also of the SCSO, retired Virginia State Trooper John Brown and Lt. Tommy Potter of the Isle of Wight County Sheriff’s Office.

That same month, Cynthia Carver, a 34-year-old mother of two from Newsoms, was reported missing and remained so for nearly a month until a female body was discovered in the southern part of Suffolk, and identified a few days later as Carver. In June, James Herbert Goodwyn Jr., 39, of Virginia Beach, was arrested and charged with Carver’s murder.

Also in June, eight high school students at Southampton High School were hospitalized after eating candy that had been laced with unknown drugs. All eight eventually recovered and were sent home. The man accused of providing the laced candy, Jaden Devon Phillips, 18, of Suffolk, was arrested a few days after the incident, as was an unnamed 16-year-old female SHS student, who is accused of distributing the laced candy within the school.

Later that month, Southampton County Circuit Court Judge William R. Savage (retired) found Jennifer Bumgardner, the former town clerk of Ivor, guilty on all charges related to her having embezzled money from the municipality during her time as clerk and treasurer. Bumgardner was convicted on 10 felony counts. She was sentenced in early October to 10 years in prison with nine suspended, plus ordered to repay $40,000 to the town by the time her probation ends, five years following her release.

The debate over whether to build a new Southampton County Courthouse or renovate the existing historic one raged on for a third consecutive year throughout 2019 — despite the matter having been put to a voter referendum more than two years ago, with the majority of city and county residents voting in favor of renovation.

In May, Franklin’s City Council reversed course on plans made in 2016 to move and consolidate the city’s General District and Juvenile & Domestic Relations courts with those of the county. They instead voted to renovate the city’s existing combined courts building on Pretlow Street, and in early October, solicited proposals from architectural firms. Around the same time, Southampton County’s Board of Supervisors also issued a new request for proposals for the county courthouse — this time clearly specifying that the project would be a renovation rather than new construction, and would no longer need extra space to absorb Franklin’s lower courts.

Franklin is still on the hook, however, for funding the remaining portions of the Southampton County Courthouse that both localities share — including the Circuit Court, Clerk of the Circuit Court’s Office and Commonwealth Attorney’s Office — and the county is on a 12-month deadline to show “actual and meaningful” physical renovations or new construction progress. Chief Judge Carl E. Eason Jr. of the Fifth Judicial Circuit of Virginia issued the deadline in July with the ultimatum that if sufficient progress was not made, he would order the existing courthouse closed in July 2020 and have court business moved elsewhere within the Fifth Judicial Circuit.

Clyde Parker does an inspection of the interior of the Charles Street Gym. The site has maintained its architectural integrity... read more