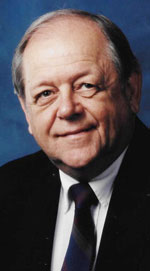 He was born on July 25, 1930, in Southampton County, Virginia, and was a son of the late Fannie Joyner and Arthur Grover Williams.

He is survived by his wife, Flora Ann, of 62 years; one sister, Erma Williams Joyner of Capron; two sisters-in-law, Zeannette R. Williams and Edna H. Hodges; and a brother-in-law, Lewis H. Davis.

D.C. was inducted into the U.S. Army during the Korean War. After he returned home he attended Chowan College, Murfreesboro, North Carolina; after leaving Chowan, he attended VPI for a short while before he transferred to the University of Richmond, where he received his Bachelor of Science degree in chemistry in 1957. He received his medical degree from the Medical College of Virginia in 1960 after which he completed his internship at Stuart Circle Hospital in Richmond.

He was a member of Phi Beta Kappa, Gamma Sigma Epsilon, the Richmond Academy of Medicine and the History of Medicine.

He was also a member of the Sons of the American Revolution, the Jamestowne Society, and for over 50 years he was a Master Mason of the Courtland Masonic Lodge No. 85.

D.C. was a consultant for over 45 years for the Department of Rehabilitative Services, Disability Determination, Richmond, from December 1968 until February 2014.

He was the Chief Medical Consultant for the department from 1975 to 2003. He enjoyed his time there with old friends and doctors, some of whom taught him in medical school. While working with DDS he received several awards including a Regional Commissioner’s Citation from the Social Security Administration for leadership in promoting the objectives of the SSA Disability Program, and in May 1998 he received another citation for outstanding contributions to the Virginia DDS.

D.C. always loved music. He was an accomplished guitar player and also played several other instruments. Until the last few years he always sang with the church choir wherever he was located. He grew up attending Applewhite’s Methodist Church and later transferred to Capron Methodist Church, which is where he returned when he went back to Capron to practice general medicine. After returning to Richmond in 1968, he joined Stratford Hills United Methodist Church. While there he was active in the Chancel Choir and the Stratford Hills Folk Group. For the past few years he has been a member of the Brandermill Church.

The funeral will be conducted at 1 p.m. on Tuesday, Dec. 31, in Wright Funeral Home with the Rev. Dr. Jim C. Dunkin officiating. Burial with military honors will follow in the Capron Cemetery.

The family will receive friends one hour prior to the service.

Wright Funeral Home, Franklin, Virginia, will be in charge of arrangements.

Memorials may be made to the American Cancer Society or the Leukemia and Lymphoma Society.