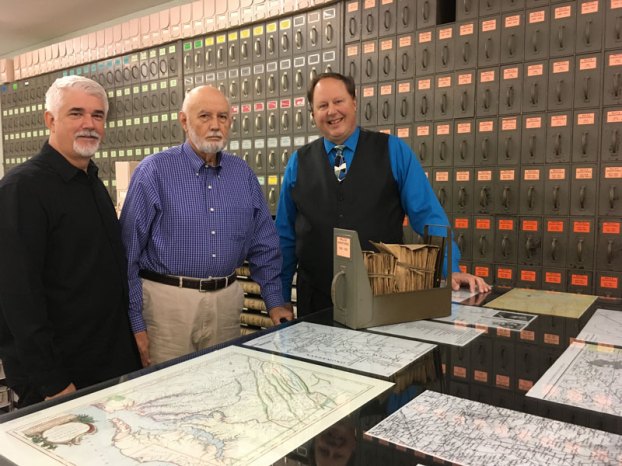 Rodney Hatfield, with his with father, Alfred Lee, and Southampton County Clerk of Court Rick Francis in the court records room. The Hatfields presented a afree online tool that enables researchers to seek out records in a county database. -- Stephen H. Cowles Tidewater News 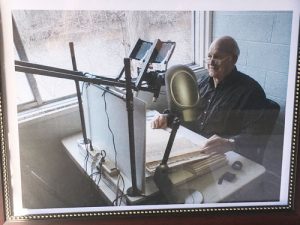 This picture of Kenneth Brantley of the Brantley Association shows him at work in the Southampton County Courthouse photographing county records so that both pages can appear together. He and many other volunteers have indexed court books. — Stephen H. Cowles Staff Writer

A father’s interest in the family tree inspired a son to the extent that it ultimately yielded fruit in the form of an extensive database, which has been made available to the public for free.

Earlier this month, Alfred Lee Hatfield, 82, was accompanied by a son, Rodney Hatfield, to the Southampton County Circuit Courthouse records room. There they presented to Clerk of Court Rick Francis an online tool that enables researchers to seek out records in a county database. (And yes, before you ask, father and son are distantly related to the West Virginia Hatfields of that notorious feud with the McCoys.)

“My dad started looking into family history before the internet,” said Rodney, who had come to visit from California.

In addition to talking to other family members and neighbors, Alfred also did research at their church, Black Creek Baptist, where much was learned through early records of the place.

“I got more inquisitive back when I was a teen,” said Rodney, who had spent time with his grandparents way back when to learn more. “I’m glad I did.”

Family research has naturally included Carol Faye Byrd, who is Alfred’s wife. Her lineage goes back to a British parish.

This past Father’s Day, Rodney created the website, www.hatfieldroots.com, as a way to honor is father. In his introduction on the site, the son explains how family research became somewhat entangled with a different project:

“The courthouse records were digitized by a private organization — the Brantley Association with the help of several local volunteers who did an amazing job of indexing all the records into summaries for each book of records the Courtland office has with them. (One million references). Although their work was a major feat — searching them online and comparing one book to the other records was cumbersome because they had no searchable feature.

“I had had this challenge as well and on my own developed a searchable spreadsheet that references all the records into one place and developed it so I could record my own notes and find more information about my family, the communities history and expand my father’s work of over 2,000 names in our family history to now over 40,000.”

Informed by Rodney about the tool, Francis asked it might be donated, which has been done on the condition it be in Alfred’s name and honor. So it was. At the website are instructions on downloading the free “Full Southampton VA Database.”

As mentioned, a different group took upon itself to digitize court records. Another tab on the website details what ultimately became known as The Southampton Project.

Kenneth Brantley, whose own family once lived in Southampton County, had contacted Frances in April 2008.

“Eager to see this remarkable collection made available to researchers of the Brantley family as well as thousands of other researchers whose ancestry had traversed the County, Mr. Brantley made a bold commitment. He agreed to digitize and, at least attempt, to facilitate through the Association the indexing of the entire court records there from 1749 through the early 1880s, under the condition that the county would (1) either display the records on a web site for no charge or (2) provide for the Brantley Association or its assignee the right to display the same.”

Thankfully, Brantley has not had to do all this on his own. Via a letter, he had contacted Southampton County Historical Society President Lynda Updike about the project. That was made public and attracted many volunteers to aid in research and indexing the court books.

It should be stressed that no public money was used to fund the Brantley Association’s work.

“This will be available for generations to come,” said Francis.