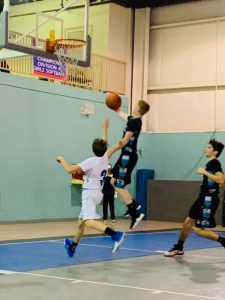 After an undefeated fall soccer season, the Rock Church School Lions Basketball team took to the basketball floor. Rock started the season continuing in its winning ways with a strong victory against Suffolk Christian Academy 43-22.

Christian Fanjul picked up a double double of 12 rebounds and scored 14 points. D.J. Dillon scored 24 points and had five assists. Seth Woodward and Luke Blythe both brought in two points. Coach Danny Dillon praised his top two players, “Christian and D.J. played so well together with their pick and rolls. They really fed off each other tonight. They are going to be a tough duo to beat.”

Later in the week, they played Chesapeake Bay Academy and brought home another win with a total score of 48-39. J. Basnight, for the CBS Dolphins team, scored a team high of 13 points. Dillon made 4 for 4 from the 3-point line, and 9 for 10 from the field in the first half. He finished with an impressive 35 points. Lastly, Christian Fanjul had 10 points and added six Rrebounds.

“What can I say of D.J. Dillon and his 22 points in the first half and only missing one shot,” exclaimed said Coach Dillon. “Wow! We are excited about continuing to build a winning program here at the Rock. The boys continue to get better and better. My goal is for their love for God to shine on the court more than their game play!”

Lasean Nichols Porter tries to get off a shot in spite of a tight check. — Frank A. Davis Tidewater... read more