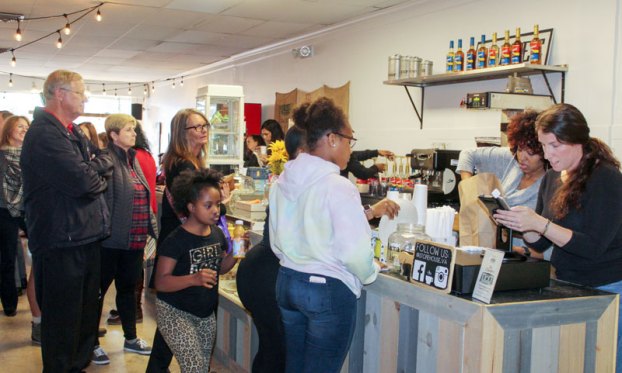 Delia Square rings up a customers' orders at Storehouse Coffee on Second Avenue when the shop had its grand opening in early November. -- Stephen H. Cowles Tidewater News

One person’s generosity the morning of Friday, Dec. 20, resulted in a nearly day-long “pay it forward” campaign at Storehouse Coffee on Second Avenue in downtown Franklin.

According to Delia Square, who co-owns Storehouse with her husband, Kasey, a customer had purchased a $300 gift card and then asked that it be left at the cash register to pay for everyone’s beverages until it ran out. Then, when other patrons learned they wouldn’t have to pay for their purchases, they began adding money to the gift card to keep the gesture going.

“We made it through almost the entire day with people paying it forward,” Square said. “I think the other customers were just blown away by the kindness. It’s really what the Christmas spirit is all about.

While the person who initially purchased the gift card requested anonymity, Square confirmed that “she is one of our regular customers,” also confirming that the customer is indeed female.

Storehouse has been part of the downtown Franklin community for nearly two months, having opened on Oct. 30.