This week, Southampton County Sheriff-elect Josh A. Wyche Sr. joined a growing list of Virginia law enforcement officers — to include Sheriff James Clarke Jr. in neighboring Isle of Wight County — who have declared their refusal to enforce any new gun laws “deemed unconstitutional.” 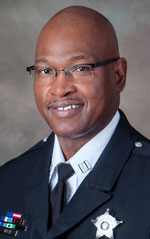 “The United States Constitution comes before any other laws,” said Wyche, who will officially take office as sheriff in January. “I have taken an oath of office to support the Constitution of the United States, the laws of the Commonwealth of Virginia and Southampton County. My office will not enforce any laws deemed unconstitutional.”

Wyche’s position on the legality of new gun laws that may be passed when the now Democratic-majority General Assembly takes office, also in January, echoes that of Southampton County’s Board of Supervisors, which passed a unanimous resolution on Nov. 25 declaring the county a “Second Amendment sanctuary.”

The term refers to the U.S. Constitution’s Second Amendment, which reads, “A well-regulated Militia, being necessary to the security of a free state, the right of the people to keep and bear Arms, shall not be infringed.” Southampton’s resolution not only declared the Board of Supervisors’ intent “that public funds of the county not be used to restrict the Second Amendment rights of the citizens of Southampton County, or to aid federal or state agencies in the restriction of said rights,” but also pledged to “use such legal means at its disposal to protect the rights of the citizens of Southampton County to keep and bear arms,” including “legal action, the power to appropriate public funds, the right to petition for redress of grievances, and the power to direct the law enforcement and employees of Southampton County to not enforce any unconstitutional law.”

The question remains, “deemed unconstitutional” by whom?

Clarke, who also referenced his oath of office when posting a statement similar to Wyche’s on Facebook on Dec. 12, clarified the next day to The Tidewater News that “deemed unconstitutional” had been in reference to “the judicial system.” He then indicated that his office would indeed enforce any and all new laws unless they were successfully challenged in court.

The Southampton County Sheriff’s Office, on the other hand, seems to be taking things one step further. Lt. Camden Cobb, department spokesman, clarified that the position of the Sheriff’s Office on the Second Amendment is as follows. If new gun laws are passed in 2020, the sheriff-elect will instruct his deputies not to enforce those laws if he, in his professional judgment as sheriff, finds them to be unconstitutional.

“Law enforcement in Virginia already has the ability to use discretion in most cases that would be considered misdemeanor offenses,” Wyche said. This discretion in deciding whether or not to make an arrest, Wyche clarified, does not apply to felonies.

On Friday morning, Virginia Attorney General Mark Herring also weighed in on the matter, issuing an official advisory opinion stating that any resolutions passed by localities across Virginia declaring themselves exempt from new gun laws have “no legal effect.” His opinion also concluded that local constitutional officers such as sheriffs “cannot nullify state laws.”

Herring further stated that “All actions of the General Assembly are presumed to be constitutional,” and that “it has long been the indisputable and clear function of the courts, federal and state, to pass upon the constitutionality of legislative acts.”

And while Herring argued that, “The scale of the gun violence epidemic is staggering: over 10,000 Virginians have been killed by a gun since 2007,” citing Virginia Department of Health reports, Wyche, when asked if Southampton County has a gun violence problem, said that the majority of gun-related calls that the Southampton County Sheriff’s Office receives are for “individuals peacefully exercising their Second Amendment rights, usually by doing some target practice in their back yards.”

“Southampton County has experienced gun violence, but thankfully not with the frequency of some other jurisdictions,” he added. “Even just one instance of gun violence should be considered a problem, but it is unclear if any of the proposed legislation would effectively combat current gun violence issues.”

It remains unclear what, if any, actions the state could take against Southampton County’s Sheriff’s Office or Board of Supervisors, should either actually attempt to prevent the enforcement of new gun laws. According to a Dec. 11 story by CBS News affiliate WTKR, Virginia Gov. Ralph Northam — who, like the majority of the incoming General Assembly members and Herring, is also a Democrat — recently stated that local governments would not face retaliation for declaring themselves “Second Amendment sanctuaries,” but also warned that localities could face “consequences” if local law enforcement officers don’t enforce gun laws. He did not, however, go into detail as to what those consequences would entail.

Five charged with ‘assault by mob’