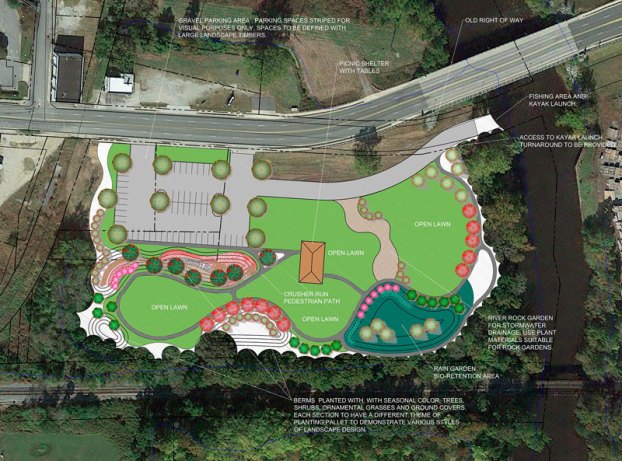 This is a concept plan for the Franklin Arboretum Park Riverview by the Second Avenue Bridge for Franklin. -- Courtesy Kimley Horn

International Paper Foundation has brought Christmas to Western Tidewater a little early this year. The organization announced via a press release on Friday that it has donated $20,000 to continue the work of developing a recreational park in downtown Franklin.

This is the second consecutive gift related to the project that the company has bestowed on the city. In mid-March of 2018, International Paper contributed 15 acres of land situated along the Blackwater River. The property, which is bordered by Second Avenue and the bridge and follows along the river’s edge to Barrett’s Landing, is beside a concert lawn, gazebo, public boat landing, visitor’s center and Civil War trails, all of which are owned and cared for by the City of Franklin. That area was originally donated by IP in the mid-1990s, according to Jenny Dixon, mill communications manager.

She added in her statement that the Riverwalk Park, as it’s being called, will offer recreation opportunities for both residents and visitors as well as supporting continuing work to revitalize downtown.

“In a unique community engagement project through which IP and City of Franklin employees, city leaders and residents will work side by side in an extraordinary team and community building effort, the grant from International Paper will be used to complete the initial phase of land improvements on the River Walk property,” she said. “The project will be conducted similar to the Armory Park playground project, which was completed in the fall of 2017.”

Franklin City Manager Amanda Jarratt stated, “The gift from International Paper is another step toward the transformational change ongoing in the City of Franklin. The generosity of International Paper and their commitment to the future and success of our community continues to overwhelm me. We are grateful for their partnership and support and look forward to kick starting the Riverwalk Project together.”

Dixon concluded, “International Paper makes sustainable investments to protect and improve the lives of our employees by mobilizing our people, products and resources to address critical needs in the communities where our employees live and work. The Riverwalk Project will make it easier for families to have access to safe and balanced recreation while encouraging healthy and active lifestyles. We are proud to be a part of this effort and look forward to getting started.”

Away in a manger

As the angels sing the heavenly good news, a shepherd in the field tends to the flock. — Stephen H.... read more