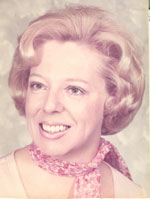 A native of Courtland, she was a daughter of the late Rowland and Carmen Price Peele, and was also predeceased by four siblings, Marjorie Peele Pope, Charles Price Peele, Chapman Donald Peele and Nettie Lee Gurganus.

Linda was a 1961 graduate of Southampton High School and attended Leigh Memorial School of Nursing.

She was a resident of Atlanta, Georgia, for 18 years, and was a Mary Kay consultant, a Century 21 Real Estate agent, and a personnel director for Snelling and Snelling before returning home to Courtland in 1989.

Linda was a former owner of Danny’s Restaurant in Courtland, a member of Courtland Junior Women’s Club and Franklin Christian Women’s Club.

Linda was a member of St. Luke’s Episcopal Church.

The funeral will be at 11 a.m. on Saturday, Jan, 4, 2020, in Wright Funeral Home with the Rev. James W. Browder III officiating. The burial will follow in Riverside Cemetery.

The family will receive friends from 6 to 8 p.m. on Friday, Jan. 3, in the funeral home, and suggests that memorial donations be made to any favorite charity.