An 18-year-old Franklin man has been taken into custody on a charge of armed robbery, among other suspected crimes, according to Franklin Police Chief Steve Patterson on Thursday morning. 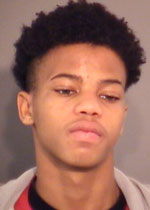 Damian Tywon Artis is in custody at Western Tidewater Regional Jail, and is being held without bond on a charge of armed robbery, among other alleged crimes.

On Oct. 24, the Franklin Police Department announced it was looking for Damian Tywon Artis in reference to charges related to an armed robbery in the evening of Oct. 20. The city’s emergency communications center had gotten a call at approximately 7:35 that a resident had been robbed at gunpoint in the 500 block of Laurel Street. Police arrived on scene and spoke to the victim, who reportedly told the officers he had been approached by two black males, one holding a rifle.

A struggle ensued and the victim was struck with the rifle, after which the assailants allegedly went through his pockets and took his money. Franklin Fire & Rescue responded and transported the victim to Southampton Memorial Hospital to be treated for minor injuries.

Patterson stated that based on a tip received from the community on Wednesday, the city police went to a residence in the 200 block of Cobb Street in Franklin, where Artis was arrested on the aforementioned charge, as well malicious wounding and theft of a motor vehicle.

He was taken to the Western Tidewater Regional Jail and being held without bond.

This case is still under investigation.

Southampton County Board of Supervisors Chairman Dallas Jones, right, presents a resolution of appreciation to Bruce Phillips for his service... read more