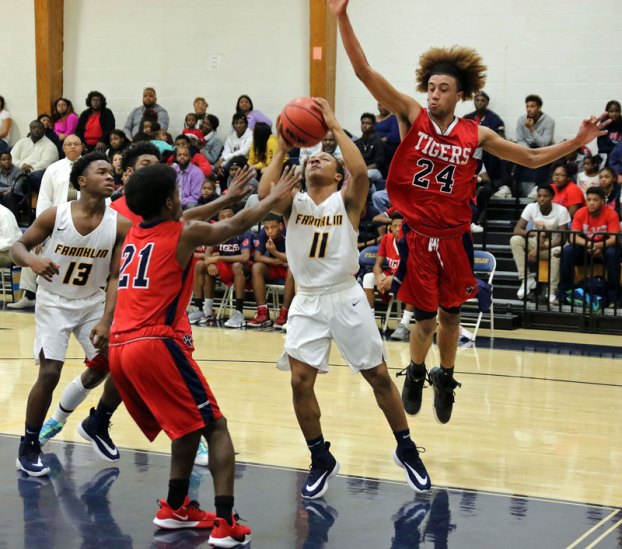 Lasean Nichols Porter tries to get off a shot in spite of a tight check. -- Frank A. Davis Tidewater News 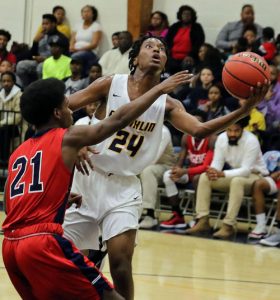 Lasean Nichols Porter tries to get off a shot in spite of a tight check. — Frank A. Davis Tidewater News

But they came out a little short and lost in a barn-burner, 68-67, to the Sussex High School Tigers.

After being behind in scoring, at the 6:04 mark in the second quarter, the home team went ahead 21-20, and on a shot at the buzzer tied the score at 28 all at the end of the first half. The third quarter was tight as the teams traded baskets with the score tight and close. The Tigers opened a 10-point lead in the final quarter, but the home team — not throwing in the towel — fought back. The Broncos playing hard had the lead 67-66 with 4.7 left to play. but the Tigers pulled of a basket to seal the win for them.

Franklin High School head coach Robbie Cutchins stated, “The comeback kids. I think that is a great one. The fight that these young men have is absolutely unbelievable. To be down by 10 points in the fourth quarter and get back into it and tie the basketball game up and have an opportunity to win, it is unbelievable. Hats off to them, they just don’t quit. We hit some big shots, and we are not a great shooting basketball team, but we got a ton of heart.”

In scoring. the Broncos had four players in double figures: Bryan Powell led with 23 points; followed by Derrick Perry with 13 points; Myroen Barrett with 11 points; and Daemari Holden with 10 points.

The Tigers also had three players in double figures. They were: Tavon Jones with 17 points; Imir Clark had 15 points; and Amonte’ Turner with 14 points.