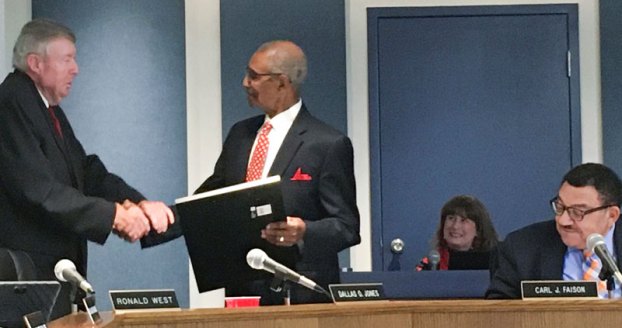 At left, vice chairman Ronald West received from chairman Dallas Jones on Monday night a resolution of appreciation for his many years of service on the Southampton County Board of Supervisors. -- Stephen H. Cowles Staff Writer

Southampton County Board of Supervisors Chairman Dallas Jones, right, presents a resolution of appreciation to Bruce Phillips for his service to the county. — Stephen H. Cowles Tidewater News

In spite of pleas to do the contrary, on Monday night the Southampton County Board of Supervisors overall agreed to approve a zoning map amendment, which could potentially affect several families in the Franklin voting and magisterial districts.

The matter first came before the county’s Planning Commission in October, and was continued last month, which was when the panel voted 4-3 to recommend — albeit reluctantly — the proposed rezoning. Specifically, that 242.87 acres be rezoned from A-1 Agricultural to CM-2, Conditional General Industrial. The property belongs to Paul Thomas and Patricia Beale Milteer and Thomas Hart Milteer, who have the land on both sides of Rose Valley Road, about 1,200 feet south of the intersection with General Thomas Highway, all are within the aforementioned districts.

The County will only purchase the land if there’s serious interest from an industry that wants to develop on that land. Retail businesses are not an option.

As she did in November, Susan Lassiter of Newsoms spoke against the proposal, explaining that a decision for rezoning would affect “farmland that’s been in my family for over a hundred years. We don’t want to see this in our backyards. Enviva is bad enough. … You need to think about it. If this was your yard, you would not want it [any industry] closer.”

J. Cary Kirkland, who also has family property connected to the potentially affected area, said, “Enviva’s enough. It’s just enough.”He added that no one on the board of supervisors would want this in their view. “I hope you won’t vote on this. The new board should be the one voting.”

Jim Hart, who’s concerned about potential property encroachment, asked the supervisors to “think about this really strong. Vote no.”

Dr. Alan Edwards agreed saying, “We need this. We need commercial development. We can pick and choose. I make a motion we go with Planning’s recommendation.”

As he was leaving with others who spoke against the issue, Kirkland called the board out, “You just ruined the quality of my life!”