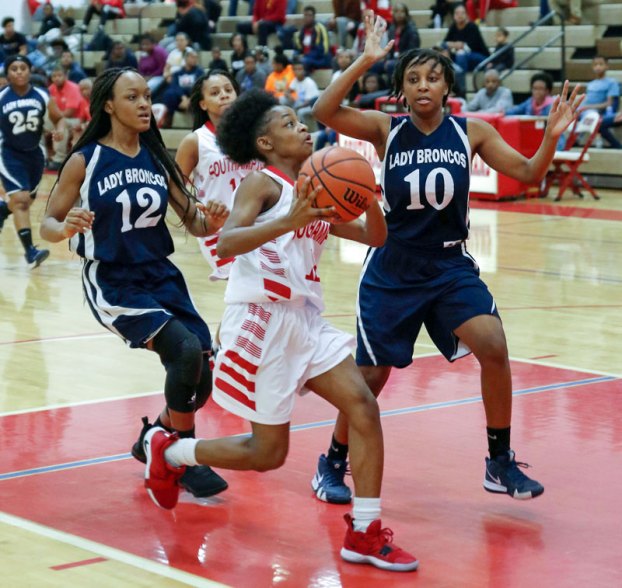 Jayla Greene makes her move to the basket. Frank A. Davis | The Tidewater News 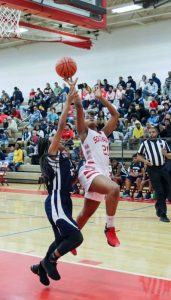 Kayli Hite gets off a shot during a drive. Frank A. Davis | The Tidewater News

The Southampton County High School Lady Indians had no problem during their 43-27 win over the visiting Franklin High School Lady Broncos during play at Southampton High School gym on Friday. The Lady Indians opened the game with a score of 16-4 lead at the end of the first quarter, and continued to hold the lead at 22-13 at the end of the first half. The Lady Broncos held the Lady Indians to just two points during the third quarter and closed the score to 28-24. But the home team pumped up the scoring with 19 points in the fourth quarter to the Lady Broncos’ nine points to seal the win.

The Lady Indians’ head coach Littleton Parker said afterward, “I thought it was a good ball game tonight and the kids played well. I was a little disappointed with our foul shooting, and we missed to many foul shots, but going down the stretch we made a couple that kicked the led up. Overall, I thought we did well, but will have to work on our foul shooting.“

In scoring, Lady Indians had two players in double figures. They were Kayli Hite with 16 points and Shakayle Slade with 12 points.

For the Lady Broncos, Arbani Wiggins led with nine points.