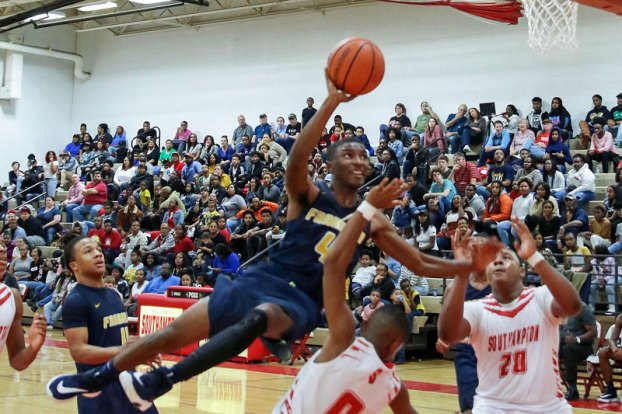 Myroen Barrett lays one up on a drive. Frank A. Davis | The Tidewater News 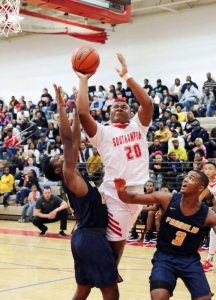 After being tightly checked, Javen Johnson rises above to shoot the ball to the basket. Frank A. Davis | The Tidewater News

The first of the famed “Back Yard Brawls on the Hard Courts” happened on Friday in the Southampton County High School gym. Fans of both Franklin and Southampton high school teams were packed to near capacity for this long-time rivalry between the two schools.

The hometown Indians jumped out early with an impressive and dominating lead, and held it until late in the third quarter, when the Broncos’ Jahmajae Bynum scored a basket at the buzzer to put the Broncos ahead 47-45. From there, the visiting Broncos turned the momentum to take a 69-64 win over the Indians.

Franklin High School Broncos head coach Robbie Cutchins said after the game, “It was a great, great win, and I cannot say enough about what these young men have done. They knew their backs were against the wall coming into this basketball game. We fell behind 20 to 5 coming out the gate and then fell behind 35 to 20 after that. Southampton put together two great runs. But the kids held their heads up high and kept fighting. And also, we had to make some big in-game adjustments on things that we didn’t have enough time to work on just because we have been short. But the way the kids paid attention — and were able to make some adjustments during the game and in this environment of one of the biggest rivalry games that they are going to have to play in — just speaks volume to what these kids have done. And I am just so proud of them.”

In scoring, the Broncos had four players in double figures. Myroen Barrett led with 14 points, followed by Bryan Powell with 13 points, Jahmajae Byrum with 12 points and Daehari Holden with 10 points.

The Indians had three players in double figures. They were led by Javen Johnson with 22 points, followed by Ablauntae Outlaw with 14 points and Elliott Cross with 11 points.