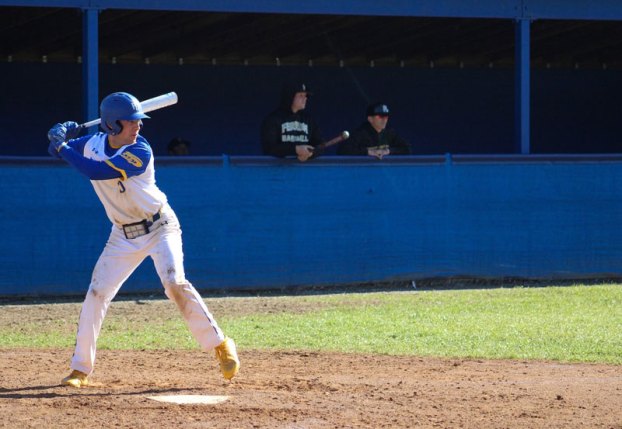 Thomas Fox at the plate for the PDC Hurricanes. Coach Daniel Rollins noted during a recent interview how well Fox and Tannor Sullivan played this past fall. -- Courtesy Jamie Dodd

PDC Hurricanes Head Baseball Coach Daniel Rollins spoke earlier this week about where the team has been and where it’s going.

As for the past practice fall session, Rollins said, “Looking back, I think early on it was everybody was trying to feel everybody else out — having a new coaching staff, new players and returning ones. They understood the expectations and moving the program forward. All seemed to mesh really well early on. That allowed us to get a lot of work in early even before school started and then move to fall season games.”

A factor that enabled to hone the Hurricanes’ skills came by being able to play every level of college ball, from junior college to the NCAA Division I. They saw the challenges and met them.

“We competed really well,” said the coach. “Our guys got excited to play upper-level competition. They did a great job to compete agains other teams. Competition is what we’ve preached all fall. Be extremely competitive.”

There’s been more to the coaching staff and players than playing ball, there’s also been community service.

After a major storm this past fall, they got outside and helped clean up debris such as broken limbs, branches. The young men also handed out candy to trick-or-treaters during Halloween.

“We want to make a positive impact on the community. It’s important not just to staff, but also the players,” said Rollins. “The guys also worked tremendously hard on fundraising, such as security at VA and W&M football games. I was very proud of their efforts of everything we asked them to do.”

He also has a couple of ideas for more civic involvement, such as becoming involved in the education side of schools.

“I would love [for us to do] a reading program with elementary schools.”

Referring to the fundraising, the coach was blunt.

“We need to ask the community for help — not for thousands of dollars. The smaller ones add up and make a difference in our program,” he said.

The target amount is $16,000 and was at $3,200 by the time of the interview. The money raised certainly will not be for extravagances, but of course for the necessities to cover travel, team meals, equipment and such.

The campaign is scheduled to continue through the first of the year, at which time the coaching staff will review their situation.

For anyone who wants to contribute, go first to Http://bit.ly/2qL6Ron, which will then take you to the team’s space in reachingourgoal.com. Another option is to go to the athletic tab in the college’s Facebook page.

That aside, the coach naturally has high expectations of his team when the 56-game season begins on Repair Tech Field on the home campus on Friday, Jan. 31.

“I’m really excited about our potential. We have exceptional talent at certain areas,” said Rollins. Asked to name a couple, he said, “Tannor Sullivan hit 17 home runs last year for us. Professional teams have enquired about him because of his potential. Thomas Fox is extremely athletic. He plays hard and knows the game. Multiple Division 1 schools have reached out to me.”

Rollins continued, “Plus, we have a core of freshmen. With youth and experience we have potential for a lot of success. If we play well as a team, we have a chance to have a great year.”

Judy Riddick, president of The Peanut Patch and FERIDIES, was one of 26 women recently honored with the Women In Business Achievement... read more