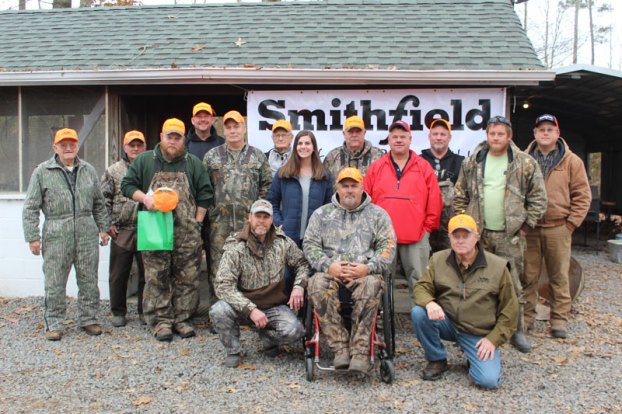 Some mmembers of the Millswamp Longbeards and Newsoms Hunt Club, along with their guests and and representatives of Smithfield Foods gather for a picture after a morning hunt on Dec. 6. -- Stephen H. Cowles Tidewater News

The guest hunters’ presence was made possible through coordinated effors by the National Wild Turkey Federation. Davy Blessing, the regional director whose territory is southwestern Virginia and along U.S. Highway 58 to Franklin, said, “That is one of our outreach programs. The unique thing is you don’t have be a veteran or in a wheelchair [to participate].”

To learn more about that organization, visit www.nwtf.org, or its Facebook page. Blessing can be contacted at dblessing@nwtf.net.

Futrell reported on Friday that while no bucks were harvested, “Several hunters bagged some deer, so there was meat to take home.”

Also involved in the day’s event was Smithfield Foods, which provided meals for the occasion.

The words of gratitude from the hunters were plentiful.

“I got numerous texts from different ones thanking us over and over,” Futrell added. “They enjoyed the fellowship and had a really good time.”

Gene “Richard” Hertell Sr., who said he’s been hunting “a long time,” gets adjusted to an Action Trackchair provided by... read more