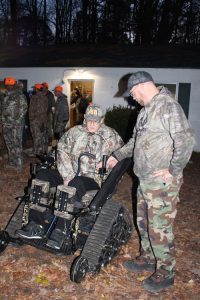 Gene “Richard” Hertell Sr., who said he’s been hunting “a long time,” gets adjusted to an Action Trackchair provided by Freedom Hunters. With him is his son, “Virgil.” — Stephen H. Cowles Tidewater News

For the seventh year, the Central Hill Hunt Club welcomed members of armed services to join them in a deer hunt. The event that started out early on Dec. 7 on Pope Swamp Road included 38 such guests, about double the number from 2018. The hope is to get to around 50 next year.

Then as now, their presence has been made possible through a partnership with Freedom Hunters. That national non-profit, according to the a volunteer coordinator Bud DePlatchett of Smithfield, organizes hunting trips, occasionally sporting events, for both active and veteran servicemen and women. There are also opportunities for their children to participate.

“If they’re military, we’ll get them out,” said DePlatchett, who added that the organization has “grown a lot,” even to the point of splitting off into four different territories. To learn more about the group, visit www.freedomhunters.org.

As an added feature that day, Freedom Hunters made available four Action Trackchairs — one of which was donated by Sen. Mark Warner’s son — for hunters who cannot get around as readily as others. In fact, before everyone headed out to seek their quarry, Gene “Virgil” Hertell Jr. helped his father get settled into one.

Getting up before sunrise was later rewarding for many hunters. The report came in earlier this week that 20 deer and one coyote were harvested.

Hunters for the Hungry program continues

COURTLAND Virginia Hound Heritage Inc. is ready to do its part in aiding the Hunters for the Hungry this hunting... read more