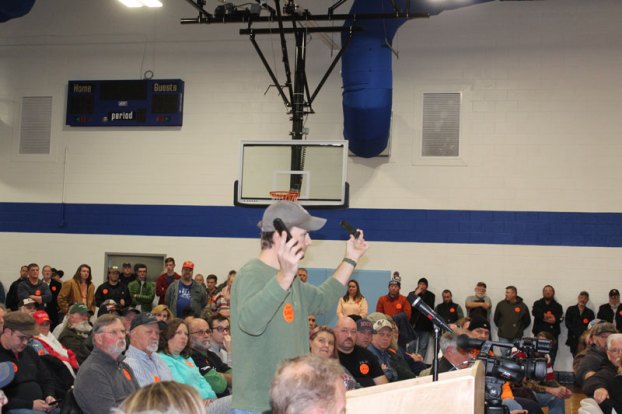 Rob Siomienski, who moved to Smithfield from New Jersey seeking to live in a state with fewer gun restrictions, holds up two magazines — one that holds more than 10 rounds and another that holds less. The one that holds more, he said, would become illegal if new gun laws were passed. He then challenged anyone who expects him to surrender his weapons to, “Come and take them.” -- Stephen Faleski

Isle of Wight passes resolution in support of gun rights

As of Thursday, Isle of Wight became the latest Virginia county to adopt an official resolution declaring its opposition to a series of proposed gun laws that may be passed when the now Democratic-majority General Assembly convenes in 2020.

Senate Bill 16, for example, which state Sen. Richard Saslaw (D-35) pre-filed on Nov. 18, would expand the definition of “assault” firearms and would make the import, sale, transfer, manufacture, purchase, possession or transport of these weapons a Class 6 felony. According to Virginia’s online Legislative Information System, the bill further prohibits a person from carrying in a public place any shotgun with a magazine that will hold more than seven rounds of the longest ammunition for which it is chambered, and makes it a Class 1 misdemeanor to import, sell, barter or transfer any firearm magazine designed to hold more than 10 rounds of ammunition.

“The bills proposed this year, SB 16 and so many others, would make many of the people standing right behind me felons,” said Del. Emily Brewer (R-64), who represents Isle of Wight County in Virginia’s House of Delegates. Brewer was one of 29 speakers to address Isle of Wight County’s Board of Supervisors during its special called meeting that evening in the Windsor Town Center to discuss whether the county should join with Southampton, Sussex and other Virginia localities that have declared themselves “Second Amendment sanctuaries.”

The term refers to local governing bodies that declare their refusal to enforce any new gun laws they consider to be in violation of the Second Amendment of the U.S. Constitution, which reads, “A well-regulated Militia, being necessary to the security of a free state, the right of the people to keep and bear Arms, shall not be infringed.”

Isle of Wight’s Board of Supervisors, however, chose not to use the phrase “Second Amendment sanctuary,” when passing their own resolution, instead proclaiming the locality to be a “Constitutional County.”

“I cannot support the use of the word ‘sanctuary,’” said Smithfield District Supervisor Dick Grice. “The long and short of it is I do not believe in ‘sanctuary’ anything. But I can support the verbiage we are using this evening.”

Southampton’s resolution had not only proclaimed the county a “sanctuary” but also pledged that the locality would “use such legal means at its disposal to protect the rights of the citizens of Southampton County to keep and bear arms,” including “legal action, the power to appropriate public funds, the right to petition for redress of grievances, and the power to direct the law enforcement and employees of Southampton County to not enforce any unconstitutional law.” Isle of Wight’s resolution, however, specifically states that pursuant to section 15.2-915 of the Code of Virginia, the Board of Supervisors “has no legislative, regulatory or enforcement authority” to enact its own gun laws, nor any authority over the “independent execution of the duties of constitutional officers involved in law enforcement.”

County Attorney Bobby Jones Jr. confirmed to the paper that per the aforementioned state law, the Board of Supervisors cannot unilaterally declare state laws unconstitutional, nor legally order the Isle of Wight County Sheriff’s Office not to enforce new state gun laws.

“Only the courts have the authority to rule on the constitutionality of an enacted law,” Jones said. “Should the county believe any law is unconstitutional, it could, as well as anyone else with standing, bring a suit to challenge the law.”

More than 410 people — the maximum capacity of the Town Center gym as determined by local fire codes — showed up to the meeting, leading Isle of Wight Sheriff’s deputies to close the doors to the gym around 7:15 p.m. when that figure was exceeded. Many sported orange “Guns save lives” stickers distributed by the Virginia Civil Defense League.

“There is a false narrative that has overtaken the country, the narrative is that there is a gun crisis,” said Tim Anderson, an attorney from Virginia Beach. “We do not have a gun problem or a gun crisis in Virginia.”

While most speakers spoke in favor of Isle of Wight passing its resolution, some were opposed.

“I’m not against gun ownership,” said the Rev. Dr. Littleton Marks, a retired Army chaplain from Smithfield. “But I’m against having a county with no gun laws.”

“This is dangerous,” he said of the “Second Amendment sanctuary” concept.

“I would not choose to live in a locality that chooses not to enforce firearms [laws],” said Hardy District resident Margaret Detar Lavallee. “Whether a law is constitutional or not is not up to individuals, community groups or any Board of Supervisors. There is only one body in this country that decides if a law is constitutional. It is the Supreme Court of the United States.”

Isle of Wight County Sheriff James Clarke Jr. had himself weighed in on the issue earlier that morning, issuing the following statement via Facebook:

“To that end, as Sheriff of this great county, I encourage citizens to stand firm in their opposition of the proposed bill[s] that will prohibit law abiding citizens the right to bear arms as guaranteed by the Second Amendment. My office will NOT enforce any laws deemed unconstitutional!

“I would be remiss if I didn’t state that a resolution passed by the Board of Supervisors will not supersede state law. However, I stand ready to have conversations with state legislators to deter gun violence without stripping away constitution rights of the citizens of Isle of Wight County!”

Some, in the comments on the post, appear to have perceived Clarke’s statement as suggesting that his office would refuse to enforce any new laws that he and/or his deputies believe to infringe upon gun rights. Yet, when the paper asked for clarification as to who would be “deeming” the laws unconstitutional, Clarke replied, “the judicial system.”

When asked if he planned to enforce such laws until such time as they are challenged in court, Clarke said, “That’s my oath to the Constitution.”

Correction: The Virginia Civil Defense League, which was referenced in recent articles on Southampton County’s, Franklin’s and Isle of Wight County’s “Second Amendment sanctuary” and “Constitutional City/County” resolutions, is correctly referred to as the Virginia Citizens Defense League.