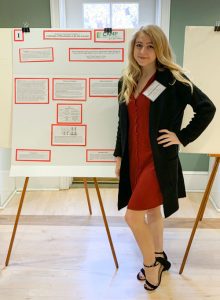 Alyssa Felgentreu of Suffolk was one of five students from Camp’s center in Smithfield to present at the annual microbiology meeting. — Submitted Wendy Harrison

Five students at Camp Community College in Smithfield represented several dozen of their biology and chemistry classmates at the annual meeting of the Virginia Branch of the American Society for Microbiology held at Longwood University in Farmville.

Alyssa Felgentreu of Suffolk, Dylan McCuiston of Isle of Wight, Tiffanie Wells of Smithfield and dual-enrollment student Samantha Hollis of Windsor High School presented work relating to the discovery and identification of the target of anesthesia. “This interestingly led to revealing a new way to monitor global air pollution,” said Camp Professor Dr. Carl W. Vermeulen, who is known fondly by his students as “Dr. V.” “Quinn Wilson of Ivor presented in a very different area—the development of a type of marine paint to be used within ships to prevent the spread of diseases among crew and passengers.”

According to Vermeulen, to find what anesthesia targets in order to work, Felgentreu applied anesthesia to a variety of different plant stems and found she could temporarily stop sap flow in them. This indicated that anesthesia’s target is not nerves, but something upstream from them. “That upstream target must also be in plants,” she said, as she proposed that the answer could be mitochondria, the powerhouses of cells. “Both plants and animals possess mitochondria,” she said. 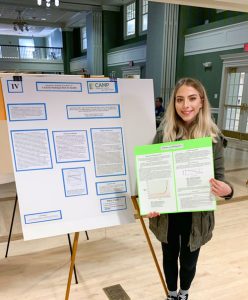 Windsor High School dual-enrollment student Samantha Hollis, according to Dr. Vermeulen, “did far more than be the ‘clean-up hitter’ for the team” at the meeting in Farmville. — Submitted Wendy Harrison

In a previous semester, Felgentreu and fellow students had found that mitochondria power the movement of sap in all the major types of vascular plants. In addition, last year in Atlanta, Felgentreu had reported earlier work on stems, finding that plants possess a mechanism that prevents the upward spread of infection in their “bodies.”

McCuiston showed that anesthetics also temporarily stopped the production of oxygen in photosynthesis. “Thus, anesthetics also target chloroplasts,” he said. His question then was about what mitochondria and chloroplasts have in common. According to Vermeulen, a cell’s way of storing energy can be likened to the “pump storage” used in the form of the tank behind most toilets in our homes.

“Little by little water is pumped into the tank, and then when needed, a gusher can be produced, releasing lots of water or energy,” he described. “In plants, light slowly crams protons together ever tighter before releasing them to power the making of biology’s main energy storage form called ATP.

Wells questioned whether the complexity of higher plants and animals is hiding the real target of anesthesia from our view. She decided to test it further by using simple organisms and found that anesthesia put algae and water fleas to sleep as well, but the same wasn’t true for the third organism. “Anesthetics had little effect on the ability of baker’s yeast to ferment and make carbon dioxide,” she said.

Hollis noted that we usually think of anesthesia as an all-or-nothing effect and proposed whether that the dose could have an effect. “The more anesthetic, the slower the process,” she said.

She also delved into the question of whether methane could be the culprit for the global decline of the efficiency of photosynthesis. After placing leaves in various concentrations of methane, her classmates found strong evidence that methane did indeed slow photosynthesis. “It is extremely important because if photosynthesis were to slow down to 70-80 percent, this might be devastating to worldwide agriculture.”

Meanwhile, Wilson presented his work on making a self-sterilizing paint for use in confined marine situations. He noted that in just the past two years two cruise ships were quarantined in port due to on-board epidemics. “One can only imagine similar cases that go unreported in navy vessels such as submarines,” he said. Wilson used one of the most commonly used interior marine paints and doped it with various concentrations of a strongly antibacterial shampoo detergent. He found a mixture of a paint and 1 percent of the detergent became sterile within 30 seconds of handling it with dirty hands.

“On one test on the railings of Jamestown High School, the effect lasted for more than a year until so much wear had occurred that the railings were repainted,” said Vermeulen. “Members of this group hope to present this to the military’s medical research unit in Bethesda in the coming weeks in hopes that a few students might be employed by those labs after leaving college.”

A Williamsburg resident and a retiree of William & Mary, Vermeulen has been an adjunct at Camp Community College for more than 10 years. He regularly has students presenting at this state-level meeting, as well as frequently at the society’s international gatherings.

Maj. Katherine McGowan, a former Riverdale teacher, was the guest speaker for the Veterans Day program last month at the... read more