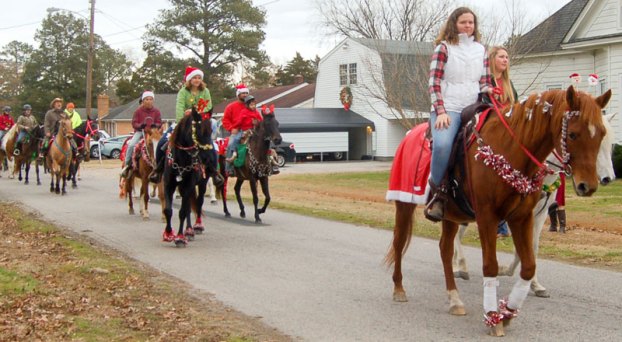 Dressed in ribbons and bells, horses come jingling all the way at the end of the parade. -- Merle Monahan Tidewater News 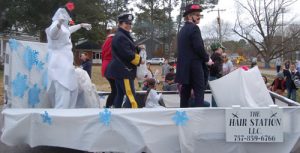 The Hair Station brought Frosty the Snowman for all to see. — Merle Monahan Tidewater News

‘Everyone seemed to have a good time’

The day was nice, despite a slight chill to the wind and few clouds, as hundreds of people lined the sidewalks of Ivor for the annual Christmas Parade and, later, the dinner and tree-lighting ceremony.

Town clerk Jaime Power said nearly 50 entrants, including as many as five by one man, showed up for the parade. Five fire and rescue companies were represented as they brought in several vehicles using their emergency lights and horns, while churches and businesses dazzled the crowd with all manner of Christmas floats.

“We’ve had nothing good comments,” said Power. “Everyone seemed to have a good time.”

“We have no count on the number of people who were here,” she went on, “but we noticed that all of the parking spaces were taken.”

The parade, Brunswick stew dinner and tree-lighting ceremony were started in Ivor just under 10 years ago. It was former mayor Sandra Vick who brought her idea to the town council.

Council approved the idea and since then, the ceremony has been held every year.

Starting at 3 p.m., there is the parade, after which there is entertainment in the Town Municipal Building before and during dinner. The outside tree is lit after dinner.

At first, the Brunswick stew, served by the Ivor Volunteer Rescue Squad’s Ladies Auxiliary was free. It was only after prices of the dinner ingredients began to increase that the auxiliary was forced to request a small charge.

However, the Christmas event has always been well attended, according to town officials. They believe it’s a wonderful way to bring the town residents together.

COURTLAND Do you need a secret place to wrap Christmas presents away from those inquisitive and prying eyes? If so,... read more