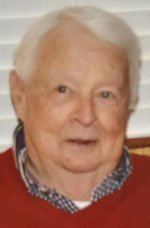 Sam was a lifelong resident of Southampton County, and was a son of the late John Herman and Nellie Moore Drewry. He was also predeceased by a brother, John Herman Drewry Jr.

Sam was a retired project manager for Severn Peanut Company. He was a member of Boykins Methodist Church, where he served on many boards. He was a 1949 graduate of Hargrave Military Academy and proudly served in the Navy Air Corps during the Korean War. Sam was a member of the Boykins Masonic Lodge No. 287 A.F. & A.M. for 66 years and the Boykins Lions Club and American Legion.

He served on the Boykins Town Council for over 30 years and was a former mayor.

He greatly enjoyed his two Meet-and-Eat groups until his health declined.

Sam was a honorary member of the Boykins Volunteer Fire Department and Rescue Squad, and served on the Board of Directors at Southampton Academy.

The memorial service will be on Wednesday, Dec. 11, at 11 a.m., in Boykins United Methodist Church, with the Rev. Kyle Bass and the Rev. Michael Baugham officiating. Burial will be private.

The family will receive friends at the residence, and suggest memorial donations be made to Boykins Volunteer Fire Department and Rescue Squad, Boykins United Methodist Church Building Fund or Southampton Academy.

Online condolences may be offered to the family at www.wrightfuneralhome.org.