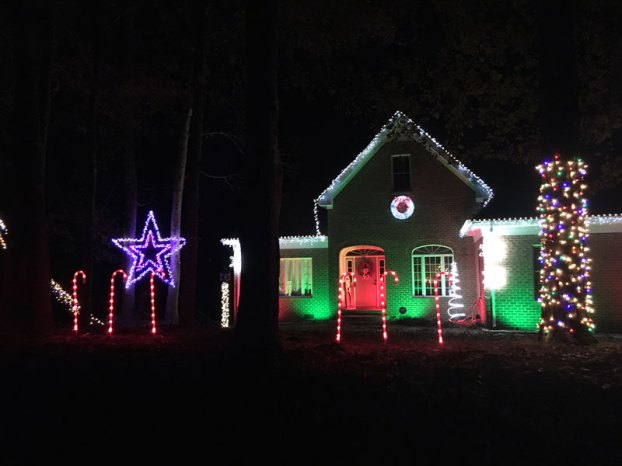 This season, there's plenty of color at the home of Kenny and Tammara Edwards. See and hear for yourself at 18415 Lakeside Drive in Courtland. -- Stephen H. Cowles Tidewater News

Synched to the sounds of Christmas 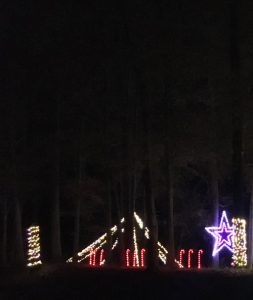 Next year, more tree trunks will be wrapped in lights. Don’t be surprised to see more candy canes and other visual treats.

The home of Kenny and Tammara Edwards on 18415 Lakeside Drive at the Darden Mill Estates in Courtland doesn’t just have colorful Christmas lights. No, no, no. There’s more.

If you stop by from 5:30 to 10 o’clock each night through New Year’s Eve, then as the sign states, tune your radio to 107.5. Then you can watch as the lights flicker and dance to the holiday music. There are eight songs, and selections from “The Nutcracker” really have the lights hopping.

How many lights, you might wonder? Wonder no more: 11,501. Tammara said they kept count of each strand. That odd number is found in a light held by a handmade Santa Claus standing on the front porch. It’s especially meaningful to her as that image once belonged to her grandmother.

Kenny credits their three children, Gareth, Aislinn and Athena, with the idea of decorating beginning in 2010.

He said, “We were driving around looking at lights and they asked ‘Why don’t we?’”

So they did, and though they had not entered any decorating contest, two years ago the display earned the family a “Most Unique” award from the Sedley Woman’s Club.

“They haven’t seen this one yet,” said Kenny.

Even before October, work was started in September for Halloween. Right after, the pumpkins were pulled down and the candy canes erected; Kenny said he finished on Nov. 25.

Instead of buying some pre-made decorations for a few hundred dollars, he was able to build them for about $40.

With a glint or two in her eye, Tammara said, “Next year, leaping arches and starbursts.”

COURTLAND During the meeting of the Southampton County Board of Supervisors on Nov. 26, several people called on the panel... read more