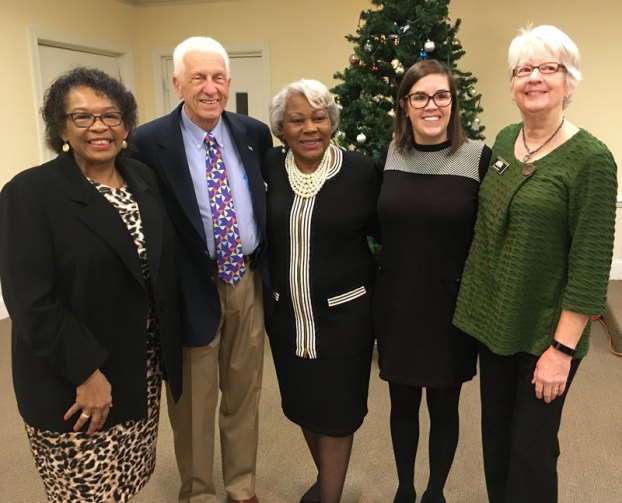 The 2020 census, absentee ballots, education and Second Amendment sanctuaries were among the topics previewed during the Eggs and Issues Pre-Legislative Breakfast, which took place early Wednesday morning in Franklin Baptist Church’s fellowship hall.

There to talk about next year’s General Assembly session were Del. Roslyn Tyler (D-75) and Sen. L. Louise Lucas (D-18). Each said in their way that they are looking forward to representing their constituents.

“I’m excited about returning,” said Tyler, who said she will be the African-American woman to serve on the state committee on education. She also noted that this year’s Speaker of the House will be, for the first time, a woman — Eileen Filler-Corn (D-41).

“The census is so important,” said Tyler. “We want to make sure everyone is counted. Money from federal and the state is based on population. It supports schools, safety, districts … Always it’s the budget.”

Priorities will be determined, mentioning that she and Lucas will afterward talk with Franklin City Council about its own priorities, education being foremost as Mayor Frank Rabil later emphasized.

Reforming laws pertaining to mental health, the Chesapeake Bay, climate change and green jobs, as well as raising the minimum wage are other concerns that the assembly will consider.

Tyler mentioned the proposal of making Election Day a national holiday so as to facilitate an increase in voting.

The Equal Rights Amendment, which she said failed in the last session, will be again be on the agenda.

Bills pertaining to workforce development have already been introduced.

Lucas will be on the committees for Courts and Justice, Commerce and Labor as well as Finance.

Regarding the growing interest in the Second Amendment sanctuary movement, Lucas said, “Localities do not have the option not to implement state laws,” and then warned that state money can be taken away later. As for any possible legislation that might affect gun ownership and the amendment, “I don’t have a clue how those bills will go.”

Education and Health is another committee in which the senator will serve. Early childhood education and the “crumbling school infrastructure” will be among her concerns.

“How will school function without broadband,” she asked.

During the question-and-answer period, someone asked, “How will you deal with inflation if the minimum wage is raised? Tyler responded first by saying “Who can operate a household on a minimum wage salary? It’s time to raise it.” Lucas acknowledged that she not know how she would deal with that situation.

Another person asked about ways to fund local schools. Lucas was pleased that her bill to establish a casino in the Greater Hampton Roads area had passed, and written in is the provision that profits from gambling establishments would be dedicated to education. The existing lottery, she noted, has had funds taken away by the state for its general fund.

Tyler recommended that more money be invested in STEM-based courses, which are for science, technology, education and math. Public and private partnerships as well as dual-enrollment courses could also help.

As to the question of helping economic development in Franklin and Southampton, Lucas encouraged

fostering economic development in Western Tidewater. “Do whatever is necessary. Without broadband and a well-educated workforce, businesses are not going to come here.”

Synched to the sounds of Christmas

Next year, more tree trunks will be wrapped in lights. Don’t be surprised to see more candy canes and other... read more