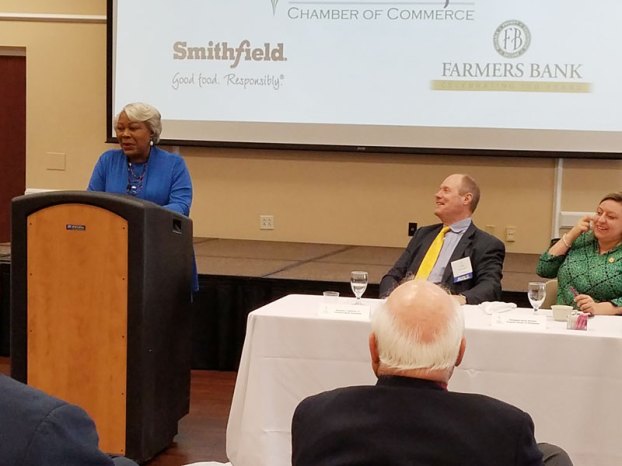 State Sen. L. Louise Lucas (D-Portsmouth) will chair the Senate’s Education and Health Committee in 2020. The senator said her focus would be on K-12 education and on Head Start programs for children ages 3 to 4. -- Stephen Faleski Tidewater News 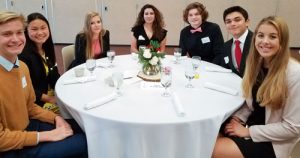 As it has in past years, Isle of Wight Academy sent a delegation of students to the pre-legislative breakfast. Pictured clockwise are Lucas Baylous, Katie Homer, Alicia Ray, Amanda Days, William Fricke, Zack Stroud and Sarah Waite. Not pictured is their sponsoring teacher, Joseph Whitley. — Stephen Faleski Tidewater News

On Tuesday at Isle of Wight County’s annual Richard J. Holland Pre-Legislative Breakfast, Del. Emily Brewer (R-Suffolk) told attendees she was “ready to assist any county” that had passed or was considering a resolution in favor of becoming a “second amendment sanctuary” — the term referring to local governing bodies that declare their refusal to enforce any new gun laws they consider to be unconstitutional.

State Sen. L. Louise Lucas and U.S. Congressman Bobby Scott, both Democrats, on the other hand, urged caution on the matter.

“The proposal is for local law enforcement not to enforce a properly passed state law,” Scott said. “We don’t even know what those laws are going to be.” 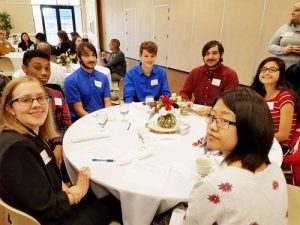 The legislators’ remarks had been in response to a county resident’s question on the matter, which was submitted anonymously via half-sheets of paper available at each table for exactly that purpose. A recent article published in The Smithfield Times states that the Virginia Civil Defense League is pushing counties to pass such resolutions in response to the Nov. 5 election, when Democrats won control of the state House of Delegates and Senate.

Another asked about gerrymandering, a topic on which Brewer and Lucas agreed.

She then applauded the federal court ruling from earlier this year that had approved a redistricting map created by a court-appointed expert from California, which was used for the November 2019 election.

“We have a point of agreement,” Brewer said. “I was proud to support independent redistricting in the House. You guys get to pick me; I don’t get to pick you.”

The legislators themselves for the most part stayed away from partisan issues when discussing their goals for the 2020 session. Lucas, who will chair the Senate’s Education and Health Committee, said that her focus during the coming year would be on K-12 education, and on Head Start programs for children ages 3 to 4.

“We’ve got to get these young students started early,” Lucas said.

She also said she would oppose any modification of her casino bill (Senate Bill 1126), which passed in 2019, to allow one in northern Virginia — citing a Joint Legislative Audit & Review Commission (JLARC) study that concluded that only five casinos in Virginia could be self-sustaining. The cities authorized to have casinos in Lucas’s bill — should the governing bodies of those localities approve the idea — are Bristol, Danville, Norfolk, Portsmouth and Richmond.

Brewer highlighted her past efforts to reform Virginia’s adoption laws and the 2019 General Assembly’s passage of a tuition freeze for public higher education institutions in the Commonwealth. One bill she has already filed for the 2020 session is House Bill 44, which, according to Virginia’s online Legislative Information System, adds cancers of the colon, brain or testes to the list of cancers that are presumed to be an occupational disease covered by the Virginia Workers’ Compensation Act when firefighters or other types of employees develop these cancers. According to the LIS, the bill removes the requirement that the employee who develops cancer had contact with a toxic substance encountered in the line of duty in order to receive compensation.

Scott said that one of his priorities at the federal level will be to raise the national minimum wage, which he said has not increased for the past 10 years. He then claimed that a person working a full-time minimum wage job cannot afford a modest, two-bedroom apartment anywhere in the country. This is verified in a June 2018 article by The Washington Post, which cites the National Low-Income Housing Coalition’s annual “Out of Reach” report. The 2019 “Out of Reach” report states that in Virginia, which has the 13th highest housing wage, a worker earning the current minimum wage of $7.25 per hour would need to work 128 hours per week to afford a two-bedroom rental home.

Another of his priorities, he said, is to increase the percentage of tuition that federal Pell grants cover for college students from low-income families, and to allow such grants to be used for graduate school, not just undergraduate degrees.

As always, Farmers Bank President Dick Holland Jr. — son of the late Virginia Sen. Richard J. Holland, for whom the breakfast is named — also made remarks, during which he encouraged bipartisanship at the state and federal levels.

“Who now has the fortitude to cross party lines?” Holland asked. “If you cross party lines now, your own party will chastise you and probably run somebody against you in the next election, and it can probably cost you committee assignments … Who in our state or federal government will have the courage to stand up and say, ‘I’ve had enough of that. I have no fear of losing in the next election. I will truly be representing the best interest of my constituents, not my party.’ My father did that.”

He concluded by encouraging all to pray for their elected representatives.

FRANKLIN The Franklin Police Department is partnering with the Franklin-Southampton Area United Way and the Armory Drive McDonald’s to collect... read more