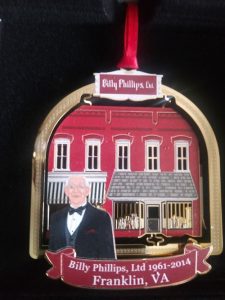 Billy Phillips Ltd., a former men’s clothier, is featured for this year’s ornament, which is selected by the Downtown Franklin Association. — Submitted Clyde Parker

Each year, the Downtown Franklin Association identifies a person or an institution in our community for special recognition through the issuance of a commemorative Christmas ornament. This year, the Association selected William F. “Billy” Phillips — a man who was in business in downtown Franklin for decades.

Billy Phillips was born in La Follett, Tennessee, in 1937, but moved to Boykins in 1945, with his family, when his father accepted a position in Boykins operating the Boykins Theater. He graduated from Boykins High School in 1955. The family moved to Franklin in the latter part of 1955. In 1956, he completed post-graduate study at Southampton High School.

From 1957 to 1958, he worked for Lawyer Fred Stewart’s “Sportsman Shop,” a men’s clothing store, located on East Second Avenue in Franklin.

In 1961, he started “Billy Phillips Ltd.,” a men’s clothing store, in a section of a downtown Franklin building, at 103 N. Main St., then owned by Edgar Weede who operated “Nicholson & Weede Farm Supply” out of another section of the same building. Ten years later, Billy bought the section he was using for his store. Several years later, he bought the entire building which he now owns.

In 1963, Billy and Toni Young of Windsor were married. Their children are Joanna Kunz and Maryanna Koehring.

“Billy Phillips Ltd.” was an iconic and well-known young-men’s clothing store and drew customers from a wide-ranging market area. Billy was known for his ability to tailor basic “off-the-rack” clothing to fit the customer. And, for decades, his was the “go-to” place for tuxedo rentals for high school proms and weddings. He retired in 2014, completing 53 years in business on Main Street in Franklin.

Concurrent with most of his years in operating “Billy Phillips Ltd.”, he maintained what he calls his “hobby” — dancing. He taught tap dancing for three years while in high school. A little later, he also taught ball-room dancing. From 1957 to 2017, in Chester, Virginia, Billy and Toni taught cotillion, to 7th and 8th grade students, averaging 100 students for each grade. Billy described the cotillion as more of a “social program” than a dancing program — although, of course, it was both.

Wife Toni characterized Billy’s success. “He was the same to everybody.”

FRANKLIN The Franklin Police Department needs your help in identifying this person. Cars in the downtown area and the Clay... read more