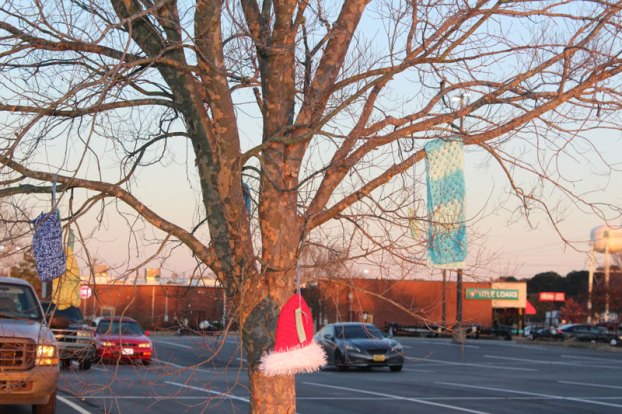 Scarves and hats have been tied to different trees in the parking lot at Lowe's in Franklin. They are free to anyone who is cold. -- Stephen H. Cowles Tidewater News 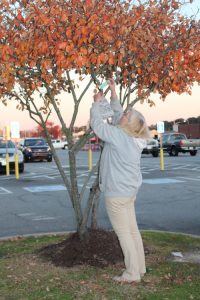 Keli Jo Judas of Franklin Crafters Gallery ties a hat to a tree branch in front of Lowe’s on Armory Drive. The hat is one of many made by tbe late Paul Edwards Jr., and available to anyone who is cold. — Stephen H. Cowles Tidewater News

Some trees in the parking lot at Lowe’s in Franklin have started to sprout hats and scarves. This is not a side-effect of any purported climate change, but more realistically, the effort of a local businesswoman looking to share the handiwork of a deceased craftsman.

Last week, Keli Jo Judas, owner of Franklin Crafters Gallery, began tying the cold weather apparel within easy reach on the branches. Each garment has a tag that states, “I am not lost. If you are cold, please take a hat or scarf. In loving memory of Paul Edwards Jr.”

She said that Edwards had operated Boykins Florist before dying five years ago. But when Edwards wasn’t working, then he put other skills to use in making the aforementioned clothes.

“I knew his wife, Barbara, years ago. She saw what I was doing with my shop and offered what he made [to be sold],” said Keli Jo. “We had so many hats and scarves. One of his daughters, Gretchen Edwards Bodner, said, ‘He just wanted people to enjoy and use what he created.’”

The baby hats and blankets have gone to hospitals for the infants and children.

Already what Keli Jo had put out last week has been harvested, and she was soon to go back out on Tuesday evening to tie up more warming hats and scarves.

“I’ll be putting them out through December until they’re gone,” said Keli Jo, adding that this plans to make this an annual project done in Edwards’ name.

FRANKLIN All that’s missing is Santa Claus in this shed decorated by Lowe’s associates in Franklin. Their combined creativity won... read more