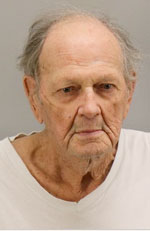 Sgt. Michelle Anaya, a spokeswoman for the Virginia State Police announced that a suspect possibly involved in the theft of a firearm from a gun show at the Virginia Beach Convention Center has been taken into custody.

Nearly a month ago, the VSP had asked for the public’s help in identifying a white male suspect in the case. After publication of the story and a photo by media, an anonymous caller contacted Master Trooper C. Lans and advised him of the suspect’s name and address.

Soon after a positive identification, VSP got a search warrant for the address of Louis Cale Spruill, 81 of the 1800 block of Chantilly Court, Virginia Beach. A search of his residence revealed the stolen World War II carbine, single bolt rifle.

Spruill has been arrested and taken to the Virginia Beach City Jail where he was given a $2,500 secured bond.

Board renews agreement with Cypress Cove

COURTLAND The Southampton County Board of Supervisors voted 4-2 last Monday night to renew the County’s agreement with the Cypress... read more