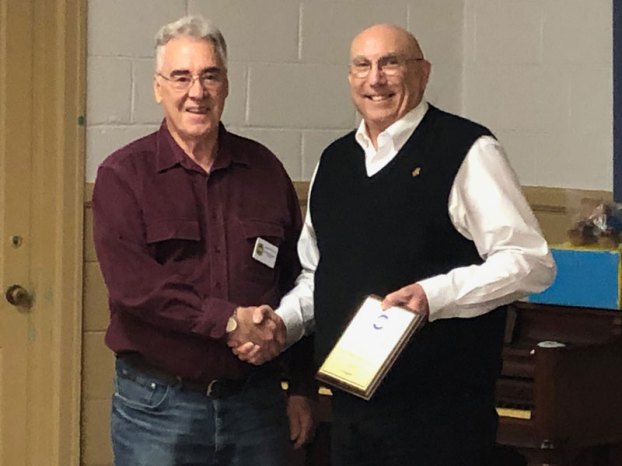 The Ruritan Club of Windsor, on Nov. 19, presented the 2019 Windsor Ruritan of the Year Award to Sam Askew. He has served two terms as club secretary during which Askew has been diligent in sending in club news articles and photos which were published in the Windsor Weekly, the Ruritan District Newsletter and the National Ruritan Magazine.

Askew is the pastor of Windsor Christian Church and serves on the Economic Development Authority of the Town of Windsor.

The club also annual presents to the Windsor Volunteer Rescue Squad several stuffed Rudy Bears that are given in times of distress to children. This year’s presentation was made at the meeting by Bentley Richardson to Chief Keith Griffin.

Nov. 19 was also a historic occasion for the Windsor Ruritans. In 1930, the club was chartered and although never officially stated, it has been a club for men only. With a membership of 60 men, funds are raised and invested in the community through scholarships and donations to local causes and institutions that provide needed services and assistance to residents.

Becoming aware that the majority of Ruritan Clubs were co-ed, the Board of Directors suggested to the membership that the time for change had arrived. Carl Eason, the oldest member, sponsored Patsy Ambrose and Rebecca Duck for membership at the October club meeting. They received unanimous approval and were installed that evening.

By Wendy Harrison SMITHFIELD A collection of books related to Frankenstein at the Blackwater Regional Library in Smithfield. Submitted |... read more