WHS junior Averi Westheimer, center, was named an All-American cheerleader this summer at a National Cheerleaders Association Camp, and traveled in late November to Walt Disney World to participate in the Varsity Spirit Spectacular with over 750 cheerleaders from across the country. She was recognized as one of several Isle of Wight Achievers at the November county school board meeting. She is pictured with school board members Alvin Wilson and Jackie Carr, SHS student liaison Devin Fitzgerald, WHS student liaison Leah Carroll, Supt. Dr. Jim Thornton and school board members Kirstin Cook, Vicky Hulick and Julia Perkins. Submitted | Lynn Briggs

The following Windsor area students were recognized at the Isle of Wight County School Board meeting in November:

Averi Westheimer, a junior at Windsor High School, was selected at a National Cheerleaders Association camp this summer as an All-American cheerleader. She traveled to Walt Disney World in late November to take part in the Varsity Spirit Spectacular. While there, she marched with over 750 cheerleaders from all over the country in one of Disney’s Christmas parades at the Magic Kingdom. 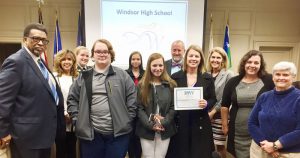 Also recognized was WHS yearbook sponsor Cassandra Presson and her former students, Russell Deans and Taylor Horne, for their work on the 2018-2019 edition of WHS’s yearbook, “The Duke.” This edition, according to IWCS spokeswoman Lynn Briggs, received the rating of Trophy Class from the Virginia High School League, which she said was equivalent to winning a state championship.

The Windsor High senior of the month for October, Basalisa Andujar, was unable to attend the school board meeting last month due to an athletic event, and was instead recognized this month along with the November WHS senior of the month, Stephen Branch. 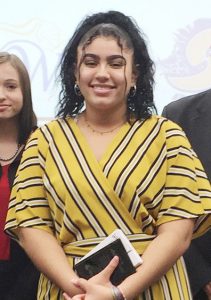 Basalisa Andujar is the WHS senior of the month for October. Pictured behind her are WHS student liaison Leah Carroll and Supt. Dr. Jim Thornton. Submitted | Lynn Briggs

“Basalisa is a natural leader,” Briggs said. “Her enthusiasm for pursuing her goals makes her an inspiration to others. Basalisa is a leader in the classroom and on the volleyball court. Her dedication to her goals is evident in all she does.”

“Basalisa is a dedicated worker in every part of her life — in the classroom, on the volleyball court, at wrk, and in her community,” Scott said. “She is a light to those around her; she lifts others with her energy.”

Andujar hopes to attend The College of William and Mary after high school and study law. 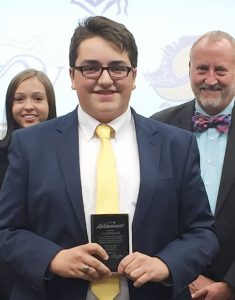 Stephen Branch is the WHS senior of the month for November. Behind him are WHS student liaison Leah Carroll and Supt. Dr. Jim Thornton. Submitted | Lynn Briggs

Regarding Branch, Briggs said, “All four years of Stephen’s high school career have been marked with academic success. He has met every challenging course with academic integrity as he excelled in his educational performance, all while completing numerous dual enrollment and advanced placement courses. Stephen is well-rounded due to his involvement with extra-curricular activities and service organizations.

“Stephen serves as Windsor High School’s Town Council liaison, where he reports on events and data from the school and his opinion is considered and valued on topics discussed by the local government. Most recently, Stephen was asked to serve as a member of the Town of Windsor Citizens Group, completing responsibilities such as surveying constituents, disaggregating data, planning community engagement events and developing a strategic town growth plan with a clear vision and mission. He also participated in the Isle of Wight County Chamber of Commerce Student Leadership Institute as a junior, as well as the Drug Abuse Prevention Project, where he worked with his peers to develop an intensive plan to decrease high-risk behaviors for teens in Isle of Wight. These acts of leadership make Stephen a stand-out amongst our students.”

“In all of the examples of Stephen’s leadership and academic success, in a society of self promotion, Stephen’s desire to serve others is not self-serving or to be recognized; however, he is satisfied with a deed well done,” Sullivan said.

COURTLAND Thanksgiving came a week early for the first grade students at Southampton Academy. Dressed as either Native Americans or... read more