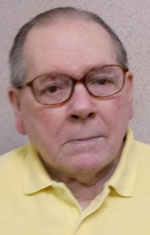 Born on Sept. 4, 1936, in Roxboro, North Carolina, and reared in Carrsville, Fennon was a son of the late Ollie Fennon Turner Sr. and Lera Young Turner.

He was also predeceased by a son, Daniel P. Turner; a brother, Gilbert W. Turner; and his dear friend, Jane Brown.

Fennon was retired from the Sheet Finishing Department at Union Camp Corporation with 35 years of service. He also helped his wife Faye at Shoe Show for years.

The memorial service will be at 7 p.m. on Monday, Dec. 2, in Wright Funeral Home with the Rev. Nathan Decker officiating. Burial will be private.

John S. Lankford FRANKLIN — John Saunders “Johnny” Lankford, 81, of Franklin, Virginia, passed away with his family by his... read more