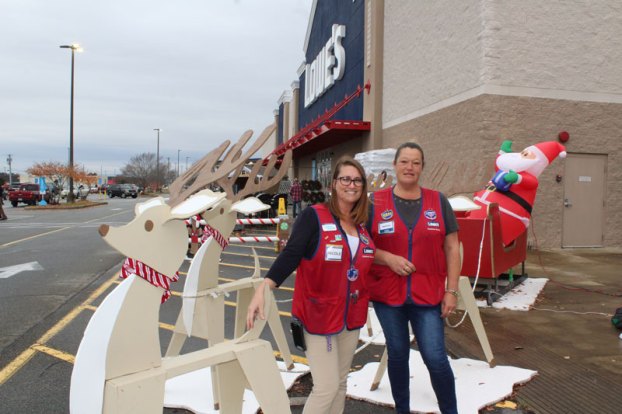 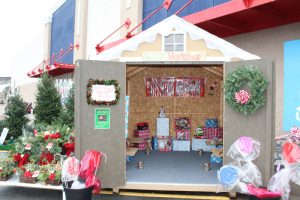 All that’s missing is Santa Claus in this shed decorated by Lowe’s associates in Franklin. Their combined creativity won the store third place in the Gold Cup Challenge. Stephen H. Cowles | The Tidewater News

The creativity of associates at Lowe’s in Franklin is evidently abundant this holiday season. Outside the store are tall wooden toy soldiers, a workshop for Santa’s elves, gingerbread men, and even reindeer ready to pull his sleigh. All that made it possible for the local hardware supplier to win recognition in the company’s Gold Cup Challenge. The Franklin site earned third place out of 633 participating stores in the company’s northern region within District I, which goes to Michigan, Pennsylvania and New York, among other Northeastern states.

“This is really awesome,” store manager Nicole Martinez said about the win, adding “We had a good time [decorating.]”

At the site, she brought out associate Wanda Bradshaw, who made the reindeer. Dewey Bradshaw, her husband, created the sleigh.

To congratulate the Franklin store, the company’s division vice president, Que Vance, came to see the display for himself earlier in November.

In addition to the award, the staff will also be treated to a thousand dollar catered dinner before Christmas.

COURTLAND The Southampton County Board of Supervisors unanimously voted on Monday night to become a “Second Amendment Sanctuary.” Before that,... read more