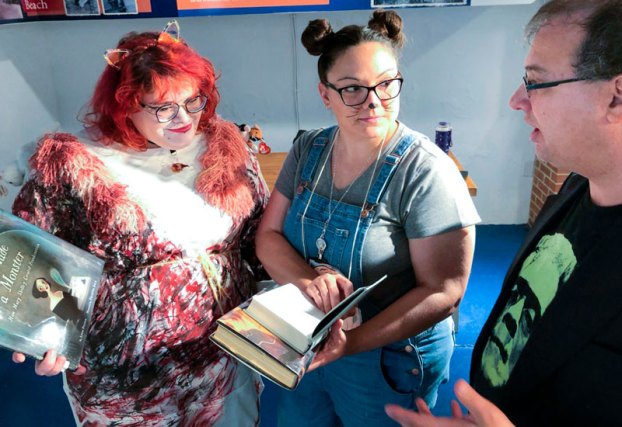 Costumes were optional at the event. Blackwater Regional Library Cataloger Anita Rose, dressed as a kitty, from left, and Branch Manager Hillary White, dressed as the mouse from “If You Give a Mouse a Cookie,” talk with Bill Camp after the presentation. Submitted | Jennifer England 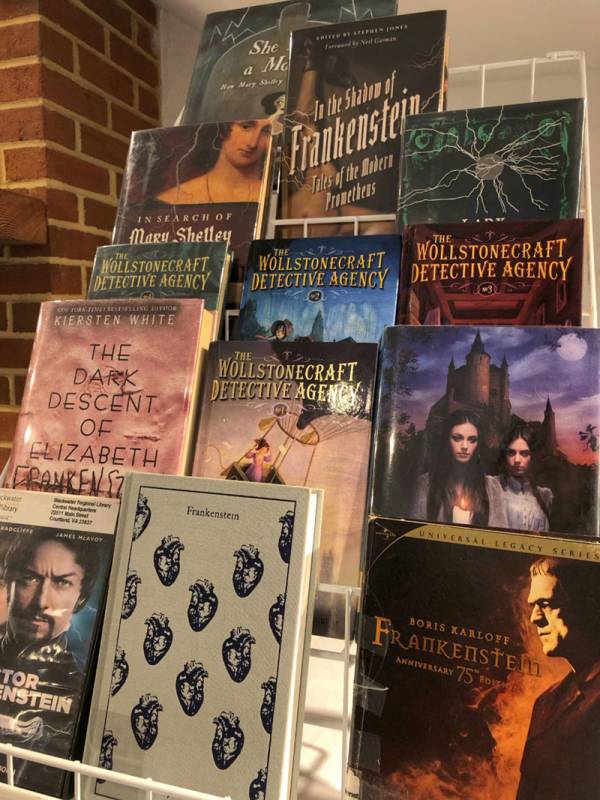 A collection of books related to Frankenstein at the Blackwater Regional Library in Smithfield. Submitted | Jennifer England

Camp Community College adjunct English instructor Bill Camp made a fitting presentation during the month of October at the Isle of Wight County Museum. Titled “Six Degrees of Separation: Smithfield and Mary Shelley’s Frankenstein,” the information Camp provided highlighted connections between the town and the famed author’s “Modern Prometheus.”

Six degrees of separation refers to the concept that any person is connected to another by no more than six links or acquaintances. Camp presented to the audience that the show boat, James Adams Floating Theatre, made a dozen stops in Smithfield on its cruises up and down the mid-Atlantic Coast during the early 20th century.

He told them how novelist Edna Ferber actually cruised on the James Adams to conduct research for her book, “Show Boat,” which was published in 1926.

The Blackwater Regional Library also participated in the event, showcasing their related collection of books and encouraging more reading and research, according to Director of the Isle of Wight County Museum Jennifer England. The library also led activities for attendees.

“Bill’s presentation was wonderful,” said England. “It was a great discussion of the history of Frankenstein, the literary history of Mary Shelley’s writing and the golden era of film.”

She noted that the museum has some displays and information about the floating theater and Ferber’s “Show Boat.”

“We are going to incorporate his ‘Six Degrees’ into the reworking of our exhibit,” she said. “We are also looking forward to other presentations with Bill in the coming year.”

Camp received a scholarship last year from the Horror Writers Association to support his work on a non-fiction book that will examine how the story was interpreted and presented at different times in our history and across cultural lines.

COURTLAND The Southampton County Board of Supervisors unanimously voted on Monday night to become a “Second Amendment Sanctuary.” Before that,... read more