Pastor Anthony Rawlings of Celebration Church said the food bank brought enough food and supplies for each of the 227 households in Southampton Meadows. -- Stephen Faleski - The Tidewater News 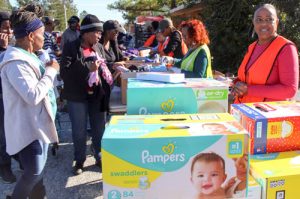 On Tuesday, Celebration Church and Enviva Pellets Southampton LLC partnered with Smart Beginnings Western Tidewater and the Food Bank of Southeastern Virginia and the Eastern Shore to provide Thanksgiving dinners for the residents of the Southampton Meadows mobile home park.

According to Celebration Church Pastor Anthony Rawlings, the partnership arranged for enough food to be delivered to supply each of the 227 households living in the park. Distribution of supplies was from 1:30 to 3:30 p.m. In addition to food, families were also provided with clothing and baby supplies. 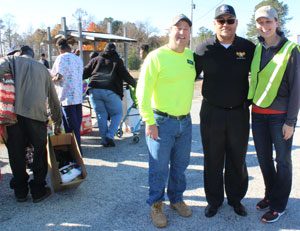 Rawlings added that the church had participated in a pilot version of the food distribution program for eight weeks during this past summer, also in partnership with the food bank and Smart Beginnings. The church plans to soon make this a monthly event at the mobile home park’s pavilion, he said.

Chris Brown, community relations manager for Enviva Southampton, said Enviva had become a sponsor after he had learned of the program while participating in the Franklin-Southampton Wellness Coalition with Rawlings. Also participating for the November event were volunteers with United Way.

COURTLAND The report of a student bringing a weapon to Southampton High School on Friday launched an immediate lockdown shortly... read more