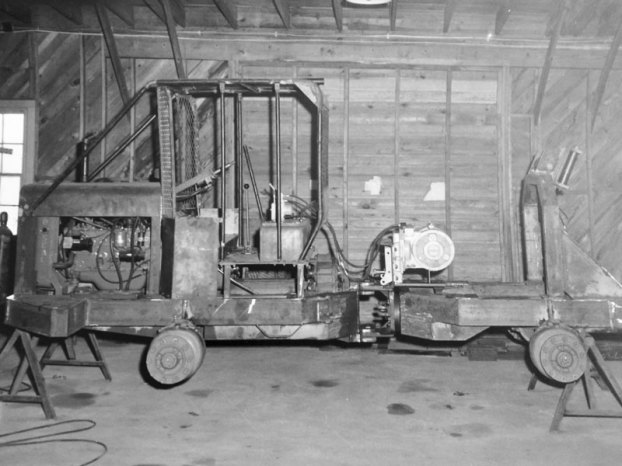 From left, accountant Robert H. Stephens replaced James F. Briggs Jr. with the title of Franklin plant accountant and became responsible for all accounting functions at the Franklin plant. Carl W. Stone, vice president for engineering and production, continued with responsibility for all tractor design work and tractor production in Franklin. Alfred J. Rollison, vice president for sales, became responsible for marketing products from all three of the company’s manufacturing facilities. Wallace T. White was named to the newly created position of director of services. Briggs was promoted to the newly created position of vice president for finance and has assumed responsibility for financial matters at all company facilities. — Submitted Clyde Parker

Franklin Equipment Company, a Franklin-based manufacturer of logging tractors, has announced major organizational changes affecting the company’s operations at all three of its locations. In addition to maintaining its home office and manufacturing facilities in Franklin, Virginia, the company operates manufacturing facilities in Independence, Oregon, and Elmira, Ontario, Canada. Under the new organizational structure, sales, engineering and financial functions for all three locations are now coordinated and controlled out of Franklin. 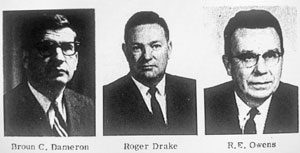 Under the new organizational structure, Richard E. Owens moves up from the position of executive vice president to the newly created position of assistant to the president and vice chairman of the board of directors.

Broun C. Dameron has just replaced Owens as executive vice president; and, as such, has assumed responsibility for overall operations of the company under the guidelines and policies established by the board of directors and officers.

Alfred J. Rollison, vice president for sales, is now responsible for marketing products from all three of the company’s manufacturing facilities. He is also responsible, in coordination with engineering, for product improvement, development and diversification.

Carl W. Stone, vice president for engineering and production, will continue with responsibility for all tractor design work and tractor production in Franklin. In addition, he will be responsible for coordinating engineering functions between Franklin, Elmira and Independence.

James F. Briggs Jr., who formerly served as secretary-treasurer, has been promoted to the newly created position of vice president for finance and has assumed responsibility for financial matters at all company facilities.

Wallace T. White, a native of Henderson, North Carolina, who just recently moved to Franklin, has been named to the newly created position of director of services. He is responsible for the parts, service, purchasing, trucking, shipping-receiving, stores and production planning departments.

Accountant Robert H. Stephens replaces Briggs with the title of Franklin plant accountant and is now responsible for all accounting functions at the Franklin plant.

Commenting on the recent organizational and personnel changes, Drake said, “I feel that these changes will go a long way toward making our company a more efficient and profitable organization.”

He further stated, “I have the highest confidence in these men as they take on their new and expanded responsibilities.”

Franklin Equipment Company is now marketing its products, world-wide, through approximately 100 dealership locations. “Franklin Loggers,” of which there are now 25 different models, can be found throughout the United States and in such diverse places around the world as Central America, South America, Canada, Africa, France, Denmark, New Zealand, Australia, New Guinea, Indonesia and the Philippines.

The plant in Independence, in addition to being a tractor assembly operation, also functions as a foundry for the entire company. It is there that the housings for various of the tractor components are produced. That facility manufactures several large tractor models and fabricates components and parts for use not only in its assembly operation but also for use in the assembly plants located in Elmira and Franklin. Employment in Independence stands at approximately 105.

The plant in Elmira has just started up and plans are underway to get that facility in full operation in the very near future. They will manufacture tractors exclusively for the Canadian market. They are now operating with a small staff, but employment will increase substantially over the next few months. Employment there is expected to be in the neighborhood of 150 people.

The Franklin operation which currently employs over 250 people, is now in full production, with two full shifts, producing four to six complete tractors per day.

Franklin Equipment Company was officially founded on July 16, 1962, in Franklin, Virginia, by Roger W. Drake, a native of Boykins, Virginia. That founding was preceded by four years of prototype tractors which were tested and proved by Union Bag-Camp Paper Corporation woodlands trials. The first manufacturing facility was in a hangar at Franklin Municipal Airport. When that facility proved to be inadequate space-wise, the company relocated to a facility at 217 E. Second Ave., in downtown Franklin, operating there until 1966 when the company moved into its present facility — a 280,000 square foot facility at Councill and Carver Roads in Camptown.

By Scott Baker In this week where everyone is distracted by Thanksgiving details, many Christians across the globe are preparing... read more