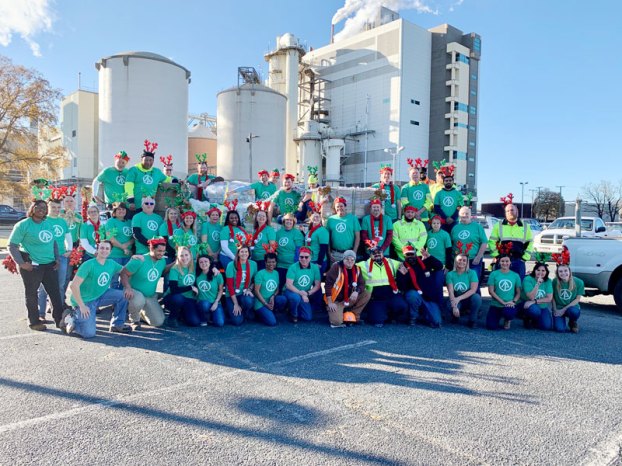 Employees of the Franklin mill at International Paper gather around the flatbed truck carrying thousands of pounds of food they collected for the Franklin Cooperative Ministry. -- Submitted Jenny Dixon 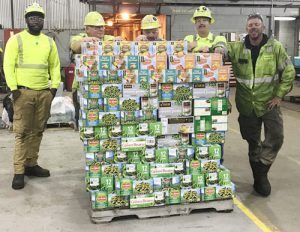 Some members of the Franklin mill’s Maintenance Team gather around a pallet of food. — Submitted Jenny Dixon

Employees at the Franklin mill of International Paper have set a new personal best record earlier this week. Not in job performance, though, but in community outreach. They collected 5.5 tons of food, which has been made available to the Franklin Cooperative Ministry.

According to communications manager Jenny Dixon, there were 3,586 pounds collected for last Thanksgiving. At the time, that was a record in the ministry’s 28-year history of receiving food donations.

“This year, the Franklin team truly outdid themselves with an astounding 11,030 pounds of food — more than tripling last year’s donation,” stated Dixon in her announcement.

Every department in the mill stepped up their food drive game this year, she said, noting that the Maintenance Team brought in more than 7,000 pounds of food, the most donations of any team at the mill, averaging more than 74 pounds donated per person. Dixon extended her congratulations to the Purchasing/Storeroom/Finance team for contributing 73 pounds per person, earning the second place seat.

“The national average collected in a company-hosted food drive is about four pounds per person,” said John Ashley, local mill manager. “I am incredibly proud of the Franklin Team for contributing an outstanding thirty-three pounds of food per team member.”

Margaret Anne Smith, ministry director, stated, “Once again, your generosity has set a new record and blown us away … broadly speaking, we want to change lives … the truth is that it’s difficult to talk about concepts like budgeting when you don’t know how you’re going to feed your family their next meal. Thank you for supporting our neighbors struggling with food insecurity.”

FRANKLIN While hearing praise for one’s work is all well and good, it’s the critiques and criticisms that can lead... read more