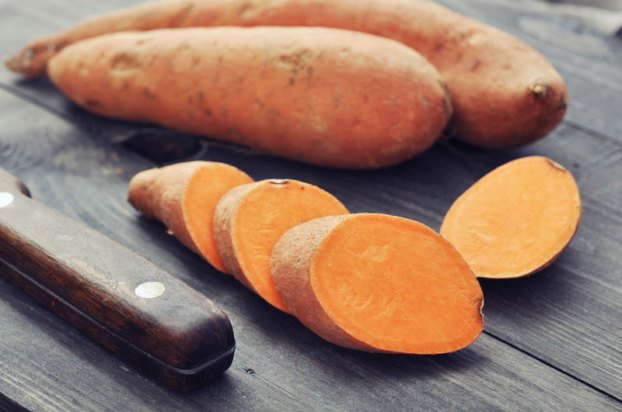 You’ll want to include sweet potatoes on the menu for a tasty and wholesome Thanksgiving meal with friends and family. Not only are these potatoes the lovely color of autumn, but they also bring loads of nutrition to the table.

Sweet potatoes are a rich source of vitamins A and C and a good source of vitamin B6, potassium and fiber. Ipomoea batatas is a starchy, sweet-tasting root vegetable that belongs to the morning glory family. The sweet potato is often called a “yam,” but is botanically different from true yams.

This tender perennial (USDA zone 9-11) has been cultivated for its orange-fleshed, edible tubers for over 2,000 years. Columbus reportedly brought the sweet potato back to Europe from the New World as a potential food crop. The plant is a vine -bearing heart-shaped leaves.

Species plants and varieties grown for tuber production have attractive enough green foliage. Yet the cultivars with their purple-, chartreuse- or variegated (pink or white) leaves have transformed this vegetable into an ornamental foliage plant. Tubers of the ornamental varieties may be edible but not as tasty as those bred for food production. And the ornamental plants generally do not flower.

Ornamental cultivars are often used as trailing ground covers or as container or window box “spillers” to add contrast as the vine drapes over the edge. But be aware that white tail deer love to munch on sweet potato vines before investing in the ornamental plants that will only last one season in your landscape.

When grocery shopping for sweet potato recipe ingredients, buy an extra to try out in the following science experiment for winter entertainment. Stick three to four toothpicks into the potato and insert the potato into a clear glass jar. The toothpicks should hold the potato a few inches from the jar’s bottom. Add enough water to the jar so the bottom of the potato sits fully in the water.

Place the jar in the windowsill where it will receive lots of sunshine. Check the jar daily, adding water when needed to keep the potato bottom wet. Soon sprouts will form on the bottom of the potato indicating roots will begin to emerge. In a week, small leaves will grow from the top.

Keep the water in the jar at the same level. A few days after the first leaves appear, vines will begin to grow. After two to three weeks, there will be several long vines with green leaves. Continue watering your potato as usual in the jar or transplant it into a pot with soil. Your potato will continue growing into a green, leafy houseplant.

A cold Great Blue Heron in the Nottoway River. Submitted | Jeff Turner Spirit of Moonpie and I spent the... read more