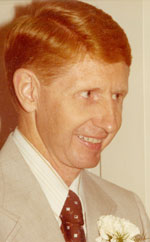 He was a son of the late James Thomas and Mary Edith Rawles Jones, and was also predeceased by a son, Andrew Hardy Jones; and a brother, Thomas Rawles Jones.

Bobby was a 1944 graduate of Holland High School and attended VMI before serving his country as a merchant seaman and a member of the Army during the occupation of Japan.

Upon honorable discharge, he continued his education at UVA. He returned home to take the position of Holland Postmaster, which he held for three years. He then took over his father’s grocery business and was proprietor of the Dutch Market for 45 years, a role in which he enjoyed serving his community.

Bobby also served as an active member and president of the Ruritan Club, a volunteer fireman and a member of the Town Council. He served Holland Christian Church as an active member, deacon and superintendent and teacher of Sunday school.

Bobby had an avid interest in family genealogy and was sought out by many as an authority on the history of the Holland Community and the surrounding area. His other lifelong interests included golf, tennis and bridge.

The memorial service will be at 2 p.m. on Saturday, Dec. 7, in Wright Funeral Home.

The family will receive friends there one hour prior to the service. The reception will follow in The Village at Woods Edge. Burial will be private.