A series of articles written within the past year about the Southampton County Courthouse has earned staff writer Stephen Faleski recognition by the Virginia Coalition for Open Government. 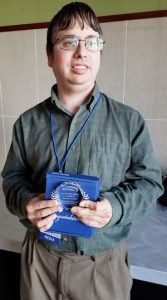 Stephen Faleski, a staff writer at The Tidewater News, holds up his award as a runner-up for his contribution of stories in the inaugural Media FOIA Awards, sponsored by the Virginia Coalition for Open Government. — Submitted Stephanie Faleski

As he stated in his introductory letter when submitted the stories, “The series investigates claims that plans were hatched to merge Franklin’s and Southampton’s courts without Franklin’s City Council having taken a vote on the matter, as well as claims that the county’s courthouse referendum education brochure misled voters as to the consequences of voting “yes” or “no” to relocating the Southampton County Courthouse. Essentially, the series asked the classic journalistic question, “What did the County know and when did it know it?” as well as, “What did it tell the city government and voters prior to the referendum?”

Earlier this summer, the organization announced an inaugural contest calling on print, online and broadcast media to submit stories they published that required using the Freedom of Information Act. That is, media having to obtain information that required filing FOIA requests.

Faleski was selected as the runner-up for the Non-Daily Newspaper Division, and was lauded during a luncheon on Monday in Richmond.

“Particularly impressive is the number and breadth of the emails requested, analyzed and reported in the series of articles,” noted the guest judge, Ron Keefover, executive director of the Kansas Sunshine Coalition for Open Government.

Megan Rhyne, executive director for VCOG, said, “There’s so much good work that’s being done year in and year out by all media levels, and we want to make sure we were recognizing people using public records to inform their communities to uncover coverups and tell truth to power.”

COURTLAND A proposal to create an official historic district within the town of Courtland is on the agenda for the... read more