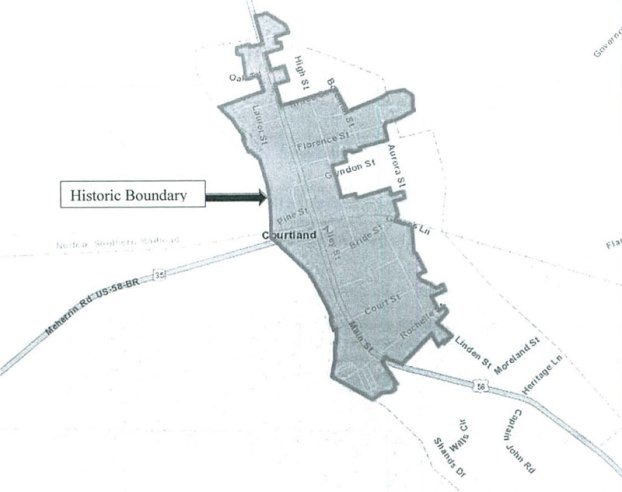 A proposal to create an official historic district within the town of Courtland is on the agenda for the Thursday, Dec. 12, joint meeting of Virginia’s Board of Historic Resources and the State Review Board in Richmond. The proposed district would encompass 135 contiguous acres in the northern half of the town, stretching from just south of Rochelle Street through just beyond the town’s northern border. On Nov. 12, representatives of the Virginia Department of Historic Resources hosted a public information meeting in the boardroom of the Southampton County Administrative Center to explain to town residents what creating the proposed district would entail.

“I was impressed that on a cold, snowy night we had about 25 people attend the meeting, including the mayor [Danny Williams] and several members of the Town Council,” said Elizabeth Lipford, an architectural historian with the DHR’s Eastern Regional Preservation Office.

According to Wynn McDaniel, a member of the Southampton County Historical Society, the County had filed an application several years ago to have a district within the town listed on the National Register of Historic Places and the Virginia Landmarks Register. This plan had been based on recommendations for a historic district that had been included in an architectural survey of Southampton County done in 1999. In 2017, the Society began to collaborate with Courtland’s Town Council and Board of Supervisors to complete the designation process, which will culminate on Dec. 12, provided a majority of town residents do not object.

SCHS president Lynda Updike on Tuesday afternoon confirmed that, stating that the County did the preliminary work, but didn’t finish.

“Most of those who spoke [at the Nov. 12 meeting] asked good questions and generally expressed support for the district,” Lipford said.

She explained that newer properties within the proposed boundaries will still be included in the district, but would be designated as “non-contributing” structures.

“Listing on the Virginia Landmarks Register and the National Register of Historic Places is an honorary designation that does not place any restrictions on private property owners,” Lipford said. “Advantages include public attention to the history and importance of Courtland as the courthouse village for the Southampton County since 1752, as well as new opportunities to promote this history through heritage tourism.”

While there are communities, such as Smithfield, which have locally designated historic districts and an accompanying local architectural review board that is tasked with reviewing any proposed changes to the exterior of buildings within that district, this is different from the VLR and NRHP designation being proposed for Courtland, she added.

Mayor Williams, speaking at the Nov. 12 meeting to a resident who expressed concerns on this matter, said that there is no desire on the part of the Town Council and no plan to put such a local district or town regulatory body in place.

Updike also confirmed this concern of whether or not the town would put up building restrictions in the district.

“Between now and the [joint] Board meeting, property owners still have an opportunity to comment, ask questions or object to the listing,” Lipford said. “To object, owners must send a notarized letter to the director of our department identifying the property address they own within the boundaries of the historic district. They do not have to state the reason for their objection. If 51 percent of the owners object by notarized letter, we will remove the nomination from the agenda for the December meeting.”

If the Board of Historic Resources approves the creation of the Courtland historic district as presented, it will be considered at that time to be officially listed on the Virginia Landmark Register, and the DHR will issue a press release announcing Courtland’s addition to the VLR, Lipford said. The State Review Board, she explained, has the authority to make recommendations of eligibility to the National Park Service, which is the federal agency that manages the National Register of Historic Places. If the State Review Board approves the Courtland district, she explained, the DHR will forward the nomination to the NPS within 30 days, and they will act on it within another 40 to 60 days.

“Once we have heard that it has been listed on the National Register of Historic Places, we will send another letter to all property owners,” she said.

COURTLAND All but three members of the Southampton County Planning Commission on Thursday night voted to recommend a zoning map... read more