My mother’s gift to me was newspapers

As my mother lay dying this fall, I read newspapers to her, paving our longest journey together with the thing that had always brought us shared comfort. 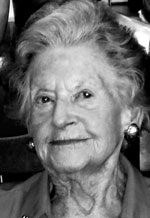 My mother and father loved newspapers and their ability to bring the truth, to hold the powerful accountable, to give voice to the voiceless, and to tell the stories that define us, divide us and, every once in a while, unite us. They never said that in so many words, but from watching them talk and begin days with The Tidewater News, The Virginian-Pilot, The Richmond Times-Dispatch and, at their second home at Nags Head, The Coastland Times, I came to understand why they held newspapers in such high regard.

My father served in the Navy in World War II, loving the press he and his comrades garnered.

Back home, he wrote letters to the papers, advancing his passionate and unpopular support for integration. My mother quietly supported him, maintaining ties with their friends, subtly trying to change their minds.

I graduated from the University of North Carolina at Chapel Hill with a degree in English and no clue as to how to make a living. I waited tables, took a typing class and started writing for free for The Chesapeake Post, just to get clippings to apply for a paying job.

I showed one of the clippings to my mother, one about an adrenaline-rushed ride-along with a Chesapeake police officer. My mother told me, ‘You have found your niche.’

I consulted often with my parents about my stories and columns. They were my best editors, next to my wife. They pulled no punches, letting me know when I was wrong, especially about my columns dealing with our family.

My father died at our Nags Head place in 2004. My mother and I, along with my siblings, wrote his obituary within hours of his death, going through many revisions, including corrections from my mother. She was loving and gracious, but she would let you know exactly what she thought. We made our deadline.

In the years after, my mom continued to draw strength from newspapers. We’d sit out on her street-side deck at Nags Head and watch the sunset. I’d go through a stack of newspapers, sparking talks with family from the stories.

My mother loved stories, period. We often began our frequent phone chats by asking each other “What’s your story?” We checked in on family members, then transitioned to talk of the news of the day, always national, state and local politics. We talked about newspaper design. We agreed that The Tidewater News she grew up with was looking better than ever. She liked the traditional layout of the Richmond paper. I liked the more risk-taking layout of the Norfolk paper. She and one of her best friends, Betty Brooks of Courtland, loved to marvel about the way wedding announcements and obituaries had changed in all the papers, with loved ones including photos of pets. That was not their traditional way.

We talked about the future of newspapers. I would tell her they will survive online.

Lately, we’d been talking about Josh Wyche’s run for sheriff of Southampton County, about how he would become the first African-American sheriff of a county that, for some, had been defined by racial injustice since the Nat Turner slave insurrection of August 1831.

On the night of Nov. 5, my sister Mimi called and put Mom on the phone. Mom had news for me: “Hey. Did you not get the scoop? Josh won!”

She got weaker in the days ahead. Last Sunday, I sat by her bedside and we talked about newspapers. She asked me to hand her the front pages of the Richmond and Norfolk papers. She held them up in her thin hands, comparing one to the other. The drugs to kill the cancer pain had taken hold, but her love for newspapers was obvious. She kept asking me questions, distressed and confused that she couldn’t understand the headlines and stories she’d loved so long.

As she faded to sleep, I kissed her on the forehead and told her newspapers will live, somehow, someway. On that our democracy depends.

JOHN RAILEY grew up in Courtland and Nags Head and is the former editorial page editor of the Winston-Salem Journal and an occasional contributor to The Tidewater News and The Coastland Times. He is the author of “Rage to Redemption in the Sterilization Age: A Confrontation With American Genocide,” and is working on a book about the unsolved Lost Colony murder of 1967. He can be reached at raileyjb@gmail.com.