S. Waite Rawls, center, reminisced about "Growing Up in Franklin" during the program. With him, from left, are Clyde Parker, Glenn and Lynda Updike; retired Judge Daniel Balfour and his wife, Jane. -- Stephen H. Cowles Tidewater News 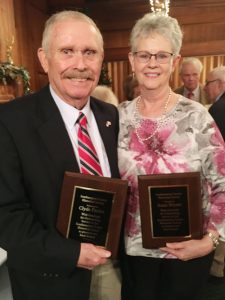 Lynda Updike, the organization’s president, said the voting resulted in a tie, so each honoree was presented with a plaque that reads: “With gratitude for outstanding service to the Southampton County Historical Society to preserve our local history.”

Bryant, for example, has been active for the past five years in helping to organize the annual Down Home Day and Heritage Day at the Southampton Ag and Forestry Museum in Courtland. Of the people with whom she has worked on the project, Bryant said, “ I am so much richer for knowing them.”

Parker was visibly moved when he was called to receive his award. A lifelong resident of Western Tidewater, he has been active in efforts to research and preserve local history, such as the old Charles Street Gymnasium in Franklin. Readers are likely also familiar with his contributions to both The Tidewater News and Western Tidewater Living magazine.

“Franklin was at its best in the ’50s and ’60s,” he said at the start of his reminiscing about friends and family.

• His father, the late Sol Rawls Jr., once built him a tree fort for his sixth birthday. “It’s probably still there!”

• After football practice, he would go to Parker’s Drugs for “a big orange juice.”

• “Fred’s Arcade was really rough then.”

Updike reminded guests that “The Virginia Peanut Story” will be broadcast on WHRO-TV at 4 p.m. on Saturday, Nov. 16, and then at 7 p.m. the following day.

She charged all present, “We must recruit younger members and work to get them interested in local history.”

Pictured above: Carrsville Elementary students and faculty gather for a group photo after they helped on Tuesday afternoon to fill... read more