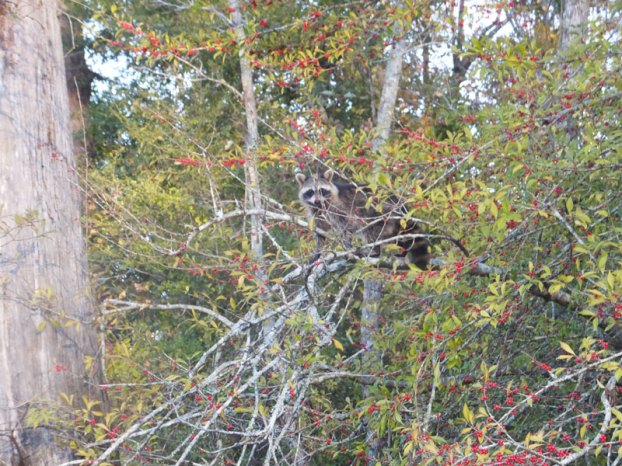 The RiverGuard spotted this mother coon in a winterberry bush during his recent trip on the Nottoway River. She was seen rushing to her offspring apparently after spotting him getting to close to the babies. -- Submitted Jeff Turner 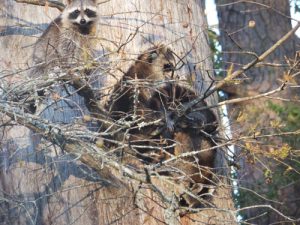 Three of the four baby coons were spotted on the side of a large cypress tree, which was likely their home judging by a hollow opening seen close by.

Spirit of Moonpie and I spent the 9th through the 11th on the Nottoway below Delaware. The water was clear, little on the low side and 50 degrees. Air temps ranged from 30 to 65 degrees. I ’bout froze the first night in the tent for some reason. My 30-degree bag just didn’t cut it until about five hours later in the night it finally warmed up. I think those sleeping bag ratings are not a comfort rating. In other words, I think that -30 rating means you will not perish in this bag at -30 degrees, it doesn’t mean your going to be toasty warm!

The fishing on this trip was OK, I guess. What I mean by that is I really didn’t fish that much. I mostly worked all the first day to get that old base camp back in shape. The second day I spent most of the day working my way upriver removing abandoned limb lines and fishing line. One 40-foot fishing line that was left in a tree recently with a brand-new orange cork had injured a Great Blue Heron. There were feathers on the line so evidently the big bird had collided with this line. I just cannot understand why people cannot remove these lines. My old decrepit body can remove it, why can’t they? Anyway, I did fish for a few hours total and caught a couple small bass and chain pickerel on the A.C. Shiner. I jigged for smallmouth for about 30 minutes but had nary a hit.

The trash on this trip almost nonexistent. I only picked up about five pieces. There was, however, a stunning amount of cotton in the water that originates from the trucks going over the Route 671 river bridge to the cotton gin. I don’t think it’s too much of a problem though, as it is a natural material and eventually biodegrades. However, I still forwarded the information on to DEQ and asked them to determine if there was a problem with this.

On my prior patrol I had a cool raccoon experience with a little coon that played hide-and-seek. That experience was surpassed this trip when I encountered four babies and their very concerned mommy. These youngins’ were perched on the side of a large cypress tree that was obviously their home as it had a huge hollow in it. Anyway, they were all four on this little limb when I came upon them. They were on the sunny side of the tree on that cold afternoon so I think the idea there was to warm up some while waiting for mom to join them. I was taking pictures like crazy when Moonpie said, “Heyyyy, daddy-o, incoming mad mommy coon on your 3 o’clock.”

Sure enough out on a winterberry bush come a very upset mommy coon. Such was her hurry to get to the babies that she actually fell into the water to get the cypress tree. The babies seeing all of this started getting antsy. It looked like they held a brief meeting then unanimously decided it was time to climb up the giant cypress to get to that hollow. I could tell mommy didn’t like that, so I backed off to calm things down and sure enough she overtook them and started leading them up the massive tree toward their house. I was expecting any minute to see one fall into the river, but fortunately that didn’t happen, even though coons can swim very well.

So it was a very entertaining, photo-fabulous experience that ended well, and everything was cool in Coonville on one of the two rivers we call the Nottoway and Blackwater.

Wildflower of the Month: Goldenrods important in fall gardens

Blue-stemmed Goldenrod Solidago caesia Unlike most goldenrods, this native perennial grows in woodlands and is a good choice for a... read more