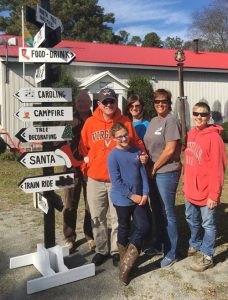 According to organizer Denise Wlodyka, there will be “tons of stuff” happening when the Polar Express Nostalgic Christmas event returns to the Southampton Ag and Forestry Museum on Saturday, Dec. 7. Earlier this month, she spoke about event during a break from helping to decorate the museum, which is located at 26315 Heritage Lane, Courtland.

Wlodyka said that from 5 to 7 p.m., rain or shine, there will be visits with Santa Claus, Christmas carols, tree decorating, a Nativity, a campfire, cookies and hot cocoa and, of course, trains.

The inspiration for this event, now in its third year, is based on Chris Van Allsburg’s 1985 book for children, “The Polar Express,” which was adapted as a movie in 2004.

Speaking of which, Hoyle Green will bring back his little train to carry children around the grounds. Reportedly, he converted a lawn mower for the project.

Not incidentally, Wlodyka reminds visitors to dress for warmth.

Inside the main building, several model electric trains will move through the displays, one of which naturally features a winter wonderland.

A raffle to win a Polar Express Train is also featured.

Admission is $2 per person or a non-perishable food item, the latter of which will go to the Franklin Cooperative Ministry. There’s no fee for children ages 2 and under.

Black Creek Baptist Church has been chosen as the subject for this year’s commemorative tree ornament. This is the fourth... read more