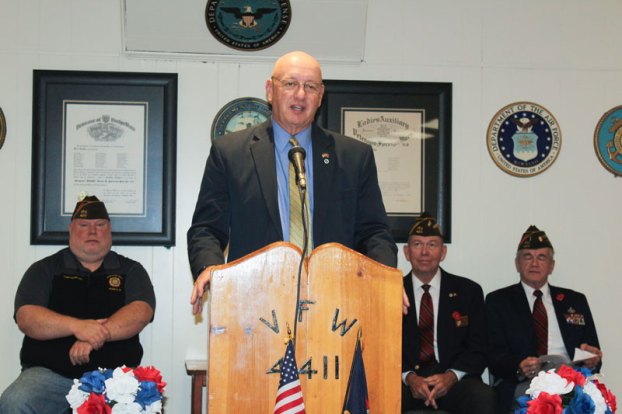 From front to back are Troop 17 Boy Scout Kendal Blythe, Girl Scout Troop 550 Mariah Mallory, Kimmie Fridley, Cheyenne Fridley and Cage Holste. Following the program inside Post 4411, they participated in the retirement of worn-out American flags, which required the flags to be ceremoniously burned. — Stephen H. Cowles Tidewater News

Members of VFW Post 4411 and its Auxiliary welcomed guests for the annual Veterans Day ceremony. This began, of course, at 11 a.m. on Monday, Nov. 11. The day’s program was made especially notable by happening 100 years after the signing of the Armistice. For at that hour and date, a halt was officially called to the hostilities between the German armed forces and those of England, France, Great Britain and other allies who fought in what would later become known as WWI.

In keeping with tradition, Boy Scouts of Troop 17 first posted the colors, followed by everyone reciting the Pledge of Allegiance. Though perhaps not intended, Chaplain Tim Cormany began his invocation at 11:11 a.m.

Veterans present were called to stand when the song for their branch of service was played by trumpeter Maurice Savage.

Before introducing the guest speaker for the occasion, Cormany recited two poems by Rolanda Burns, a veteran he recently met when the post welcomed other veterans from Richmond.

“In between stimulus and response, moral choice is made.”

That was retired USMC Col. Barton S. Sloat’s message to all who gathered inside the USMC Sgt. Jayton D. Paterson Post 4411. He told the story of how terrorists aimed their explosive-filled vehicle toward a post of Marines stationed in Iraq during spring 2008. A handful of them sacrificed their lives to stop the car from causing a massacre.

The Marine commander was later asked by an Iraqi official why the servicemen did not flee for their lives, and the reply was that they couldn’t run because they were all that stood between the ton of explosives and 40 other servicemen.

“In that space between stimulus and response was their moral compass,” said Sloat. “They chose the better path. They stood their ground. We honor all who have served.”

Speaking of service, American flags worn by time and weather were properly retired by being ceremoniously burned. Names from Post 4411’s Remembrance Book were recited as Boy Scouts, Girl Scouts and other young people solemnly brought the folded flag to the pyre.

Savage played “Taps,” and then Comrade Basil “Buzz” Ballard led all in singing “God Bless America” and gave the benediction for the food prepared by Auxiliary members.

Black Creek Baptist Church has been chosen as the subject for this year’s commemorative tree ornament. This is the fourth... read more