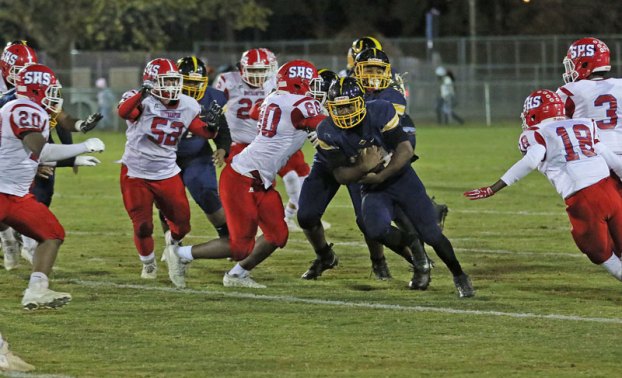 Bronco Tyvon Carr on a run up the middle. -- Frank A. Davis 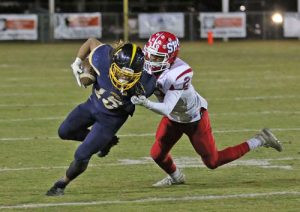 A Franklin High running back tries to get by the Southampton defender Calvin Harrison. — Frank A. Davis

“Tough game, tough win. Big game, big rivalry. It just goes to show you that whenever Franklin an dSouthampton come together you can throw everything out the window because the guys from both teams are going to give it their all,” said Travis Parker, head coach of the Southampton County High School Indians after they squeezed a 16-14 win over the Franklin High School Broncos on Friday night at Armory Drive football stadium in Franklin.

The Broncos were looking good in the first half scoring with two touchdowns and kicking the extra point on both to have a 14- 0 lead at half time. The Indians scored two touchdowns in the second half. What made the difference was, the Indians were successful on both touchdowns to score twice with 2-point conversions.

Franklin Bronco head coach Karl Robertson said, “it was a great completive game. The two teams came out and battled to the very end. Unfortunately, somebody has to be on the losing end and tonight it was us. We had some mistakes and allowed them to get back in the game and we can only fault ourselves for that. Thank God we are injury-free and continued to give him all the praise and thank him for allowing us to come out here and do this thing called football.”

In comments on behalf of the team, Kemond Rogers said, “Me and my boys played our hearts out tonight but we will be back next week better than ever.”

The Broncos will advance to the to the Region B playoffs on Friday, Nov. 16 to play at Central Lunenburg High School.

At this time, no information was available if the Indians have received any notifications for continued play.

Katelyn Lawson eyes the ball for the return as other Lady Broncos are ready to move the ball over the... read more