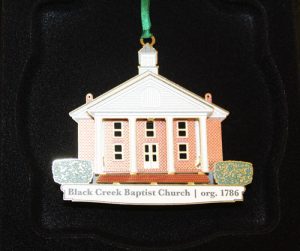 Black Creek Baptist Church has been chosen as the subject for this year’s commemorative tree ornament. This is the fourth annual ornament that Mahone’s Tavern has commissioned. — Stephen Faleski Tidewater News

The Board of Directors of Mahone’s Tavern and Museum Inc. recently announced that Black Creek Baptist Church has been chosen as the subject for this year’s commemorative tree ornament. This is the fourth annual ornament Mahone’s Tavern has commissioned.

Each ornament costs $20 and comes packaged in a gift box, which includes a printed history of the church. The ornaments are available at the Peanut Patch and Nottoway House in Courtland and Smith Jewelers and Olde Virginia Moulding and Millwork in Franklin. Purchase of an ornament qualifies as a tax-deductible donation.

Black Creek Baptist Church, according to the write-up included with the ornament, began meeting in 1772 on the same small creek where a Quaker meeting had been established several years before. On May 27, 1786, the congregation adopted a covenant and constituted itself as an independent church, becoming the second oldest church on the Blackwater Baptist Association.

Another piece of the church’s history comes from the diary of Captain Louis Henry Webb, Company A, 13th Battalion, N.C. Light Artillery, whose unit watered horses in front of the church and also slept in the church.

Seven members have gone into the ministry as pastors and one as a missionary. Two are now attending seminary.