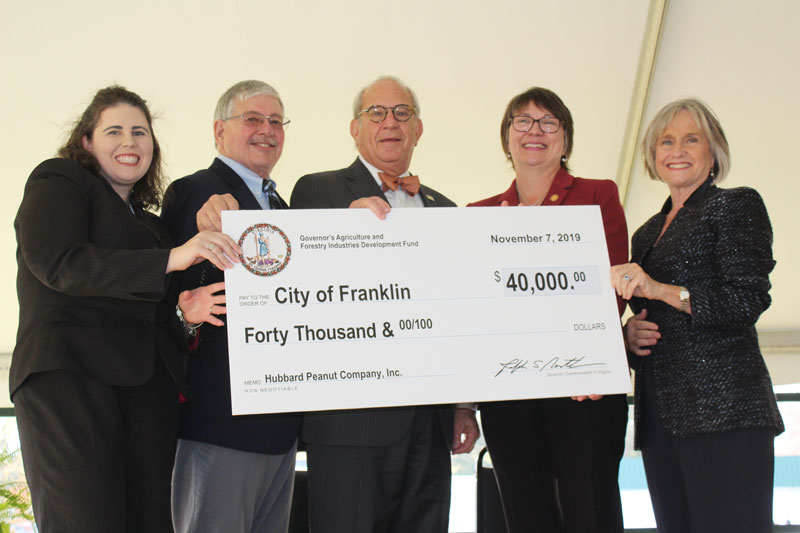 Holding up the check for Hubs' expansion plans are, from left, Franklin City Manager Amanda Jarratt, Franklin Councilman Bobby Cutchins, Franklin Mayor Frank Rabil, Virginia Secretary of Agriculture and Forestry Bettina K. Ring and Hubs President Lynne Rabil. The company will use the money for equipment for its expansion into the former Farm Fresh on Armory Drive in the city. Stephen H. Cowles | The Tidewater News

Hubs, the gourmet peanut company based in Sedley, will expand operations into the building formerly used by Farm Fresh on Armory Drive. Lynne Rabil, president and CEO of Hubs, made the announcement during a ceremony on the company grounds in Sedley on Thursday afternoon.

Later that day, Virginia Gov. Ralph Northam formally announced to the rest of the Commonwealth that Hubbard Peanut Company Inc. will invest $1.6M to establish the new operation. Rabil later told The Tidewater News that money will be specifically only for necessary equipment. She added that the purchase of the building is completely separate.

From this growth will come 10 new jobs and an increase in the purchase of Virginia-grown peanuts by a third, as well as lead to more investments at the Sedley facility.

“Our administration is focused on creating jobs and stimulating economic development across the Commonwealth, particularly in our agriculture sector, Virginia’s largest private industry,” said Northam. “We are proud to support quality, family-owned businesses like Hubbard Peanut Company that are growing opportunity and helping to revitalize our rural communities. With this new venture and their commitment to using Virginia-grown peanuts, the company will ensure their success is shared with farmers and producers throughout the region.”

Virginia Secretary of Agriculture and Forestry Bettina Ring told all at the ceremony, “It’s so nice to be back again. … This really is a great day for the Hubbard family and the Franklin Southampton business community and for us in the Commonwealth of Virginia as we celebrae new jobs, markets and investments.”

Ring outlined the importance of the agriculture and forestry industries, particularly to this state, noting they bring in about $91B and 334,000-plus jobs.

“Virginia has been a longtime leader in the specialty food and beverage sectors, and Hubbard Peanut Company has been a pioneer in this industry,” she said. “Their commitment to customer service, product quality, local sourcing, and the highest levels of food safety makes them a company we are proud to support.”

As noted in both the ceremony and within the governor’s statement, both the City of Franklin and Franklin Southampton Economic Development Inc. worked with the Virginia Department of Agriculture and Consumer Services to make the project happen in the Commonwealth. Northam OK’d a $40,000 grant from the Governor’s Agriculture and Forestry Industries Development fund for the project, which Franklin will match with local funds. The company is also eligible to receive state benefits from the Virginia Enterprise Zone Program, administered by the Virginia Department of Housing and Community Development. This is the first Governor’s economic development announcement in the City of Franklin since 2003.

Rabil also told the paper that the grant “recognizes new construction that adds to property taxes but in our case the city will receive the same property taxes as always before so the net increase in revenue is based on new equipment.”

When it was her turn to speak, she told everyone, “Welcome to our birthday party and thank you very much for this lovely gift you have brought to us today! We are proud of our Commonwealth and are very appreciative that this grant was created to benefit and encourage agriculture. We grew up with my grandfather’s peanut farms surrounding us and we have been spreading the word of great Virginia peanuts for the past 65 years. With this new opportunity, we hope to encourage our local farmers to plant even more. Of course, we always want everyone to eat more peanuts.”

The birthday to whom Rabil referred was that of her late mother, Dot Hubbard, who was born on Nov. 7. She and her husband, H.J., began the company 65 years ago.

Rabil also acknowledged Vernon Parker. who was the first full-time employee hired by the couple.

“Vernon worked with us from the very beginning until his retirement three years ago. He has seen our family business grow from the time our mother began skinning peanuts by hand in our home right here and until eventually with his help and the help of many in the community, she began outsourcing that step. Without a forklift — only their backs —Vernon helped our father on Saturdays move the peanuts that had been cooked and packaged during the week to the walk-in cooler in the McClenny Sedley Store down the street, and then back again for shipping closer to Christmas. … Thank you, Vernon.”

“As children and teenagers, we all worked after school and weekends during the season, setting up boxes, sweeping floors, making deliveries, and filling lots and lots of red, white, and blue Virginia Peanut Grower promotional bags by hand. Yes, we have been spreading the word of Virginia peanuts in many ways through the years.” 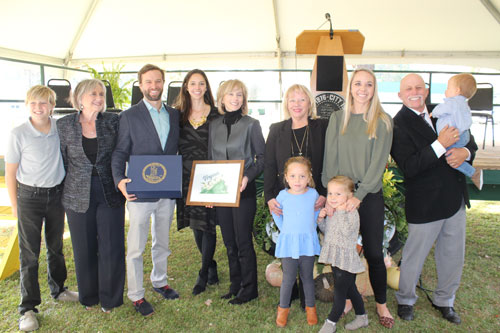 The Hubbards’ three grandchildren were called on to stand: “They are also owners and are already very engaged in leading the path forward! It is with confidence that we are taking this step with an eye toward the 100th anniversary of Hubbard Peanut Company when this fourth generation (who is also here today) will be in position to take over.”

Naturally, the employees were lauded for their dedication: “We all know none of our growth would have been possible, nor can we succeed in the future, without this valuable group of employees who are with us today. … Every single person has a very important role to fill. Among them, we have our core leadership team and individuals with much talent, dedication and a willingness to make sure that we maintain the highest standards in the industry.”

She also thanked Amanda Jarratt for her past work with FSEDI; the current team; the City and Southampton County; as well as VDACS.

The expansion is the first for Hubs since 1998, and had already run out of space within 10 years, said Rabil. The company went on to rent off-site from “our Birdsong friends,” all the while exploring possibilities.

At the Franklin site, she said, “We envision an enhanced retail marketplace that will serve customers and visitors passing through Southampton County on Highway 58. We are encouraged by the proximity of the limited access interchange along this quickly growing thoroughfare and we will capitalize on the availability of the many amenities that already exist at this gateway to downtown Franklin.

“I am happy that we will continue to grow in Sedley while expanding into the City.”