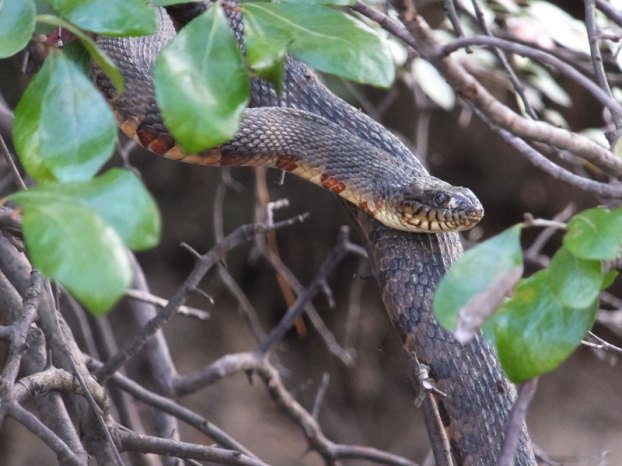 This Northern Watersnake was photographed while investigating a nest. Submitted | Jeff Turner

Spirit of Moonpie and I spent the 4th through the 6th on the Blackwater above Joyner’s Bridge. The water was clear REALLY low and 59-degrees. Air temps ranged from 47 to 70-degrees. It was beautiful weather and although it did rain early Tuesday morning, other than putting three gallons of water in the boat, it just made for some excellent tent sleeping.

The trash on this trip was very light, I only picked up four bottles. However, because the water was so low, I was not able to go downriver where typically I find the most trash. So, I will have to wait until we have more water in the river before I can go clean that up. Who knows, maybe I will be surprised and not find any down that way … yeah, right. I saw no other water quality issues either. I did remove several feet of red monofilament that someone had used for limb lines but that was about it.

The fishing on this trip was AWESOME! I caught 10 bass to 2 pounds. I even caught two bass at the same time on one lure. Even though none of the bass I caught were very big, I was pleasantly surprised to see all the fish were plump, robust and very healthy despite the lack of flow and river level.

TORPEDO AWAY! Yes, I torpedoed the bass. All were caught on a modified Heddon Torpedo, the modification being the addition of a feathered hook. It’s a little aggravating to fish topwater this time of year because of all the leaves floating on the water, but it sure was fun watching those fish come up and bust that topwater lure. I also caught several chain pickerel that very nice size. All the fish were released as I already have my fish supply for the winter.

I didn’t hunt on this trip, but there were plenty of squirrels out there also. They were everywhere. I guess they knew I had a plenty of them also frozen back home ’cause some got so close I could have hit them with a rock. 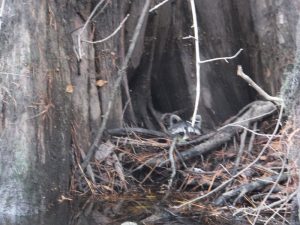 The RiverGuard and this coon played hide-and-seek at this cypress tree on the Blackwater River. Submitted | Jeff Turner

I had the most interesting game of hide-and-seek with a little coon the first afternoon right near dark. I saw the little coon out of the corner of my eye after fishing past a large cypress tree. So, I turned the boat around and grabbed the camera. Well, the little bandit-looking rascal would go around the tree every time I tried to get a picture. Then it would peek around to see where I was at. It did this for several rounds. Finally, we met on the same side and it seemed to stun the little fur-ball that I had come face to face with it. It froze for a second then proceeded to go down in the water and went in a hole at the base of the giant cypress. That stunned me as I didn’t see that hole nor did the tree look hollow. The next thing I knew, it was staring back at me from this hole, and with that I snapped the pic of its little face peering out at me. It went back and forth like that a couple of times, then I guess it went on up inside the tree. The weird thing is, that couldn’t be the coon’s normal entranceway. The water was about 3 foot low up there, so that hole is normally underwater and I ain’t never seen a coon swim underwater.

Maybe it just happened to find that hole right then, that day? Don’t know, but next time I’m up that way I will be sure to look for my little bandito friend that lives on one of the two rivers we call the Blackwater and Nottoway.

To contact JEFF TURNER about river issues email him at blknotkpr@earthlink.net.

Spirit of Moonpie and I spent the 28th through the 30th on the Blackwater below Franklin. The water was super-clear,... read more