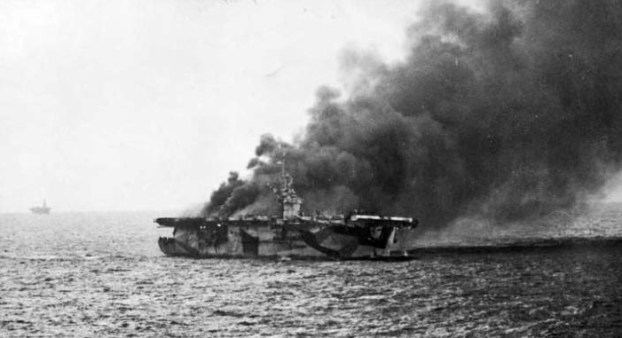 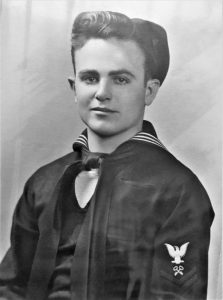 Arnold Woodrow Bowden was actually 17 years old when his father gave permission for his son to join the Navy in 1941. Submitted | Linda Selleck

In 1937, Japan — in its military efforts to dominate all of Asia and the Pacific — was already at war with China. During the next two years most of the countries of the world divided their allegiances between what became known as the Allies and the Axis powers. The United States combined forces with the Allies after its naval fleets were attacked, with no formal advanced warning by Japan, on Dec. 7, 1941, at Pearl Harbor, although the two countries were at that time involved with peace negotiations.

All eight U.S. battleships were damaged and four were sunk. There were 2,403 Americans killed and 1,178 wounded. The next day, along with the United Kingdom, China and Australia, the U.S. declared war on Japan. Germany and Italy, in solidarity with Japan, on Dec. 11 in turn declared war on America.

My father, Arnold Woodrow Bowden, a farm boy from Tuscaloosa, Alabama, entered the Navy in March 1941, after his father, William Alcie Bowden, enlisted him by lying about his age. Dad had just turned 17, and the processing center was told that he was 18. Grandfather, who had fought in the Army mostly in France during the first World War, hoped Dad’s chances of survival and his wartime experiences would be better in the Navy. Dad’s first service was aboard the USS Albemarle.

On Aug. 24, 1942, Dad was mustered upon the USS Santee (CVE-29), an aircraft escort carrier that took part in the Battle for Leyte Gulf in the South Pacific, between the combined American and Australian forces against the Imperial Japanese Navy. Starting on Oct. 23, 1944, the battle raged in the waters near the Philippine islands of Leyte, Samar and Luzon, and ended on Oct. 26. Scholars consider this fateful engagement the largest naval battle in history, with over 200,000 naval personnel involved.

The USS Santee and other combatant ships had reached the Philippine waters by Oct. 20. That first morning her gunners shot down an enemy plane and her aircraft made hits on two more that same day.

Early in the morning on Oct. 25, the USS Santee had already launched five Avengers and eight Wildcats against the Japanese. These Wildcats, called “Hit and Git” by the pilots, by war’s end had a remarkable air combat kill-to-loss ratio of 6.9:1. But at 07:40 the USS Santee was hit by a kamikaze, carrying a bomb later estimated at 138 pounds. The Japanese plane on its suicide mission crashed into the ship, immediately burst into flames, and left a 30-foot gouge in the wooden flight deck. The crash killed 18 naval personnel, wounded more, set the carrier on fire, and damaged the hangar deck.

While the men worked furiously to push the kamikaze into the ocean, put out the spreading fires and tend to the dead and wounded, a torpedo from a Japanese submarine struck the carrier at 07:56, causing the flooding of several lower compartments and creating a 6-degree list. My father, along with the other 800-plus men on board, diligently worked to save the ship and the lives of their comrades. In an astonishing feat, they completed emergency repairs by 09:35, at which time aircraft were able once again to take off and land from the damaged flight deck.

My dad survived the first kamikaze attack on a naval vessel that did NOT sink an American ship, as the USS Santee survived to continue the fight. Indeed, the Battle for Leyte Gulf was the first in which organized Japanese kamikaze attacks took place, and was the last naval battle ever fought between battleships. Historians declared it “The battle that won the war.” Before docking on Nov. 19 for repairs at the Naval Base in Pearl Harbor at Honolulu, Hawaii, the USS Santee’s crew, between Oct. 18 and 27, had shot down 31 Japanese planes and sank one ammunition ship of 5,100 tons, in addition to the damage inflicted upon the Japanese during 377 individual aircraft sorties.

The USS Santee left Pearl Harbor with 98 Marines on board who were transported back stateside, reaching Los Angeles, California, on Dec. 5. Shortly afterward, Dad made port at the Naval base in San Diego, where he reunited with his wife, Mary Elizabeth, a registered nurse working for the American Red Cross. On Oct. 8, 1945, Dad was honorably discharged from the Navy.

Dad never talked about his war experiences with me, and I only knew what little my mother, Mary Elizabeth Pittman Bowden, and my brother and sister had shared over the years. But Dad’s wartime memories were always within him. In 1956, Mom and Dad moved from Charlotte, North Carolina, to the Burdette area in Southampton County. A graduate of Franklin High School, Mom was encouraged by Dr. Rufus L. Raiford to attend the nursing program offered by the Children’s Hospital of the King’s Daughters in Norfolk, Virginia, receiving her registered nurse license in 1943.

Four years ago I contacted the government for Dad’s military records, and began reading historical accounts of the USS Santee. All the survivors who participated in the Battle for Leyte Gulf on Dad’s ship were presented with a Presidential Citation from Franklin Delano Roosevelt for their steadfast courage and acts of bravery during the horrific battle.

Seaman 1st Class Arnold Woodrow Bowden and countless others serving in our four military branches protected the freedoms of all Americans and helped liberate countless civilians in other countries during a war that directly involved more than 100 million people from over 30 countries. We are the inheritors of their profound sacrifices for life, liberty and the pursuit of happiness.

My husband Ron and I; our daughter, Sarah Selleck Kessler; my siblings, Peggy Joyce Bowden Barker and Bobby Bowden, along with his wife, Betty (whose father Ernest Walter Bryant served in the Merchant Marines toward the end of WWII); and our families are all grateful for Dad’s service. We are also grateful for the military services of my grandfather, William Alcie Bowden, and that of our daughter, Rachel Selleck, who recently completed 10 years as a lieutenant in the medical corps of the Navy. Her husband, Cody Adams, continues our family’s military legacy by recently beginning his 11th year in the Navy.

No one with a rightly ordered mind and spirit desires war. Some of the most outstanding military leaders in American history hated warfare, with its horrific and needless destruction of lives and liberties, but found it necessary in preserving the nation. As an anonymous journal entry in the 1840s was recorded, “War is all that devils could wish for.”

British Quaker William Penn, when first establishing the colony of Pennsylvania, called his actions “a holy experiment.” Much of the Bill of Rights that Penn created for Pennsylvania became part of our Bill of Rights. During its struggles from British rule, the nascent American Congress frequently declared days of fasting and prayer to seek God for His aid and assistance in their struggles for freedom.

Our first president, George Washington, a deeply devout Christian, stated that “the liberties of America are the object of Divine protection.” May God bless America and grant us all the desire to protect and preserve our hard-won freedoms, especially the freedom of religion, the freedoms of expressing thoughts, opinions and criticisms in speech and in published writings, the freedom of assembly, the freedom of a citizen-selected and duly elected government, and the many other freedoms protected in our founding documents and amendments.

May we all strive to prayerfully live in such a way as to continue the holy experiment that is the United States of America. Shouldering our own responsibilities, let us love and care for our families, lift up the common good in our communities, and pray without ceasing that such warfare and destruction, cruelty and terror never again happen on a world-wide scale, and to that end diligently labor always for peace.

LINDA BOWDEN SELLECK of Sioux Falls, South Dakota, is a 1971 graduate of Southampton High School, a retired Friends Minister (Quakers) and educator. She is also author of “Gentle Invaders: Quaker Women Educators and Racial Issues During the Civil War and Reconstruction.” Contact her at lselleck@hotmail.com.

IWCS: Salaries adjusted to align with other divisions

[Editor’s note: This is the second of a two-part series.] ISLE OF WIGHT Public records, which Carrollton resident Lawrence... read more