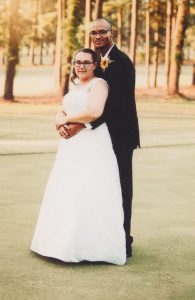 July 13, 2019, at 4 o’clock in the afternoon was a beautiful time for a wedding on the greens of Cypress Cove Country Club. That was the day Kristy Thomas and Darryl Cotton chose to be united in marriage by the Rev. Nathan Decker, pastor of High Street United Methodist Church on Camp Parkway.

The bride wore a white cap sleeve-chiffon split in the front of the dress with a scalloped edge veil decorated with crystal beads.

The flower girl was Emery Velasquez, and her dress was a mini-version of the bride’s gown.

The ring bearer was Jaiden Carter.

A floating bridal shower was given to Kristy on June 29, 2019, by Ms. Maggie Swain and Mrs. Susan Story.

After a honeymoon to Walt Disney World in Florida, Kristy and Darryl will be residing in North Suffolk.