A Franklin woman has been arrested on multiple charges pertaining to a hit-and-run incident that occurred on Friday morning. 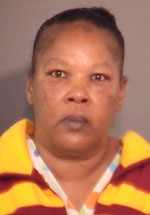 According to Sgt. Scott Halverson, spokesman for the Franklin Police Department, the city’s communications center received a call at 9:16 in reference to a hit-and-run accident that occurred in the 400 block of Lee Street. Officers’ investigation revealed that a vehicle traveling on Norfleet Street had crossed Lee Street, striking a vehicle and causing it to turn on its side. The driver and passengers in the overturned vehicle were able to escape and were taken to Southampton Memorial Hospital for treatment.

She was booked and is now being held without bond at the Western Tidewater Regional Jail.